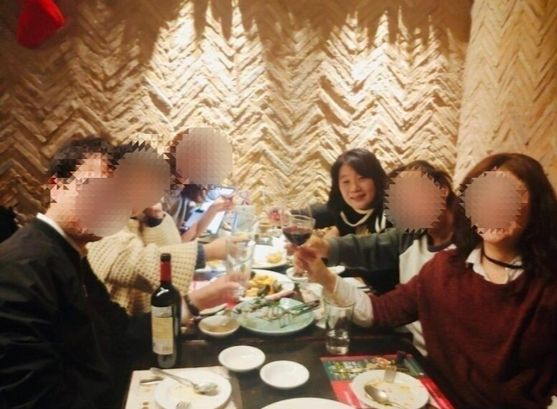 Rep. Yoon Mee-hyang of the ruling Democratic Party came under fire after posting a photo on Instagram Saturday of a recent mask-free dinner gathering with five other acquaintances sharing wine despite the ongoing social distancing campaign to curb Covid-19 cases. Yoon deleted the photo Sunday with an apology, claiming she had been celebrating the birthday of an elderly victim of wartime sexual slavery. [SCREEN CAPTURE]


Rep. Yoon Mee-hyang of the ruling Democratic Party (DP) came under fire after posting a photo on social media of a recent mask-free dinner party, despite the government’s heightened social distancing campaign amid a spike in coronavirus cases.

Yoon took a photo with five other acquaintances, holding up wine glasses and without masks, during a dinner gathering on Dec. 7 and posted it on her Instagram account on Saturday. She wrote in an initial post on the photo, now deleted, that they were celebrating the birthday of a survivor of Japanese wartime sexual slavery, Gil Won-ok.

The post read, “Carving Grandmother Gil’s empty spot in our hearts on her birthday, we are meeting by ourselves and celebrating, praying for her health. We shared a meal talking about our dreams.”

There was immediate backlash over the post, both for running counter to the government’s stringent social distancing efforts as a lawmaker who should be setting a public example and for being disrespectful toward Gil.

Critics pointed out the oddity of celebrating the birthday of an individual who was not present at the party, yet is very much alive. The elderly Gil has also not been in touch with Yoon.

Yoon deleted the photograph from Instagram following the eruption of criticism and apologized in a follow-up post Sunday afternoon.

“Dec. 7, Monday, was Grandmother Gil Won-ok’s 94th birthday,” she wrote. “However, I am not able to contact her currently and there is no way to meet her, so I was not able to send her my congratulations.”

However, Yoon went on to defend her actions noting that the restaurant had abided by quarantine measures including requiring a QR code check-in and administering a temperature check, and that it had closed at 9 p.m. in accordance with government guidelines.

After her apology, Yoon received more flak for writing it was Gil’s 94th birthday when Gil is actually 92 years old.

Her actions also contradicted a post made by Yoon’s office on Dec. 7 on its official Facebook account as a message to the public on social distancing entitled, “Let us all halt a moment!” The post noted that there had been 615 new Covid-19 patients that day, and that the government was implementing Level 2.5 social distancing measures in the Seoul metropolitan area starting Dec. 8. It encouraged people against gathering together and to “halt for a moment for the health of our families.”

Yoon, who was elected as a proportional lawmaker of the DP in April, previously served as the head of the civic group, the Korean Council for Justice and Remembrance for the Issues of Military Sexual Slavery by Japan. She has been a longtime activist speaking for the rights of the victims of the Japanese military’s wartime sexual slavery before and during World War II, euphemistically referred to as comfort women.

However, she came under intense scrutiny in May, following public accusations by Lee Yong-soo, a comfort woman survivor, that Yoon had exploited her and other victims for decades. She was also accused of collecting donations using her personal bank accounts and was alleged to have committed accounting fraud. Prosecutors indicted Yoon in September on charges including fraud, embezzlement and breach of trust. Yoon has denied the allegations against her.

Among the charges was a count of quasi-fraud against Gil. The prosecution said Gil suffers from dementia and that Yoon had exploited her physical and mental weakness and pressed her to donate a total of 79.2 million won ($73,000) to the Korean Council between November 2017 and January this year.

Opposition lawmakers and commenters online criticized Yoon for again trying to take advantage of a wartime sexual slavery survivor amid the ongoing trial.

Rep. Her Eun-a of the main opposition People Power Party posted on Facebook Sunday, “I cannot express my astonishment at seeing Yoon Mee-hyang, with her status as a lawmaker, gracefully drink wine as the whole country has come to a halt over Covid-19 and flaunt the birthday of a comfort woman victim.”

Criticism of Yoon’s gathering was not limited to opposition lawmakers.

DP Rep. Hong Ihk-pyo told MBC Radio Monday, “Everybody, including lawmakers, should lead by example and refrain from gatherings as much as possible. Posting it on social media was all the more inappropriate.”

Korea set a record for new confirmed coronavirus cases over the weekend, reporting 950 cases Saturday and 1,030 on Sunday. Health authorities have been implementing Level 2.5 social distancing measures in the greater Seoul area since last week and have urged the public against year-end parties and gatherings in order to combat the spread of the virus.