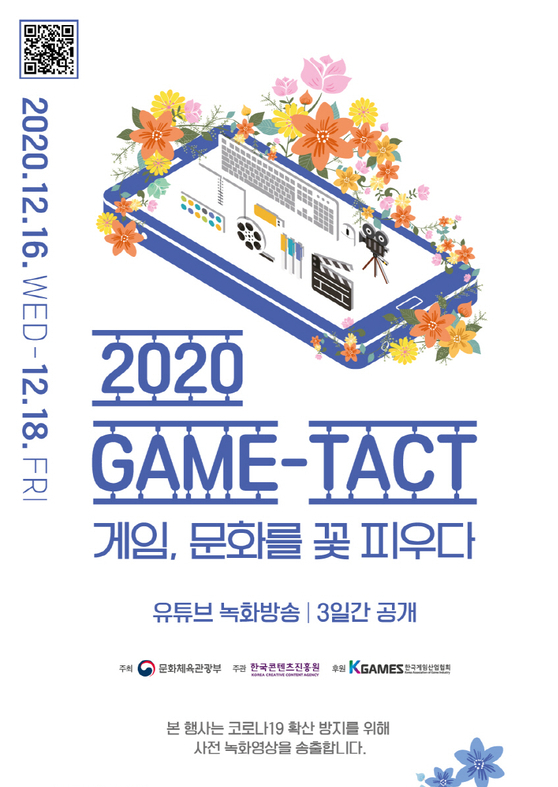 
The Korea Creative Content Agency (Kocca) will reveal a pre-recorded video session of “2020 GAME-TACT” from Wednesday to Friday, shedding light on the cultural values of games and sharing studies of cases where games helped shape people’s lives for the better.

Hosted by the Ministry of Culture, Sports and Tourism, organized by Kocca and funded by the Korea Association of Game Industry (K-Games), “2020 GAME-TACT" will include the sixth Culture Forum and an award ceremony for the winners of the Game Culture Creative Content Competition held from July 13 to Sept. 14. The session will begin at 2 p.m. for a three-day duration and is divided into two sections that run for a total of two hours.

In the first section, Kocca will award the winners of the game content competition, which included various genres of videos, written content and webtoons under the theme, “The game that bloomed my life.”

The grand prize, as well as prize money of 10 million won ($9,200), will go to Kim Jung-beom for his video titled “Mom, just 100 won for me,” which portrays his memories of growing up with friends and playing games. Three runner-ups, who will each receive three million won, include a team of five creatives named 4DLUV and its video “Game is timing,” Kim Ki-suk’s story “Miracle” and Lim Jae-wan’s webtoon “The game has connected us.” The winning content will be revealed through the video.

A six-minute discussion featuring three game experts — CEO Park Young-mok of PTW Korea, former professional game player Hong Jin-ho and webtoonist Kwak Baek-su — and moderated by Prof. Choi will take place on games as a challenge. Park’s talk will be on games’ potential to go beyond simple entertainment and enter into people's ordinary lifestyles, while Hong shares his experience as a former Esports player and Kwak introduces various cases of intellectual property expansion where webtoons are reborn as games.

The winning works of the game content competition will be available on the competition’s official website from Wednesday to Tuesday. The online space will be divided into four sections, according to each alphabet of the word game: game culture, amor (love), me (myself, ego) and emotion. Users can take a personality test before looking around the online exhibit space to be introduced first to the zone most likely to appeal to them. Visit www.koccagccontest-view.com.