Oodles and oodles of protein-filled noodles

Oodles and oodles of protein-filled noodles 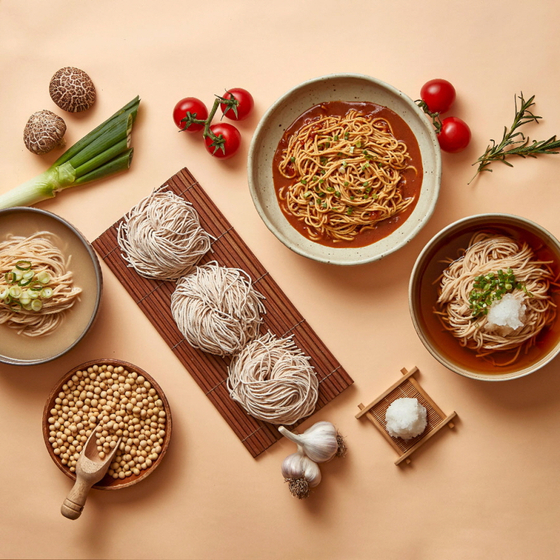 
Eating at home has surged amid the coronavirus pandemic and with many more conscious about their health due to the closing of gyms, there has been a shift in attention toward takeout and delivery that are considered to be healthier, low-calorie options.

Start-up Benefeats offers packaged noodles that are high in protein while Pulmuone makes noodles from dubu, more commonly known as tofu, for those craving carbs and in search of a lower-calorie alternative.

Benefeats — the sister company of SG Dinehill which runs a variety of eateries in Korea including famed Korean barbecue restaurant Samwon Garden — has a goal of replacing bread, rice and noodles for those trying to limit their carb intake. With the release of VIP noodles last month, an acronym for "veggie important protein," the company has created a product so that even those on strict diets can still enjoy noodles.

The noodles look similar to buckwheat noodles with their beige color, and they even taste somewhat similar too. Their texture is different however, and they tend to break more easily than other noodles made with wheat or rice.

Given that this kind of texture and taste may still be very foreign to some, the company also offers sauces and broth that pair well with the noodles, like curry sauce or anchovy and beef broth. You can just buy the noodles to make your own dish, or buy a meal package that includes such sauces or broths.

The first production in November completely sold out, while the second production has just hit the local market. Tightly controlling the amount of products hitting the shelves means the company can make changes to the noodles based on customer reviews. It hopes to increase the amount of protein and lessen the amount of carbs with each updated version. More sauces to accompany the noodles will be released in January.

“There can be more options for noodles in the future, such as one that's a better fit to make pasta or ones suitable to be put in soups,” said Lei Communication, Benefeats' PR agency. 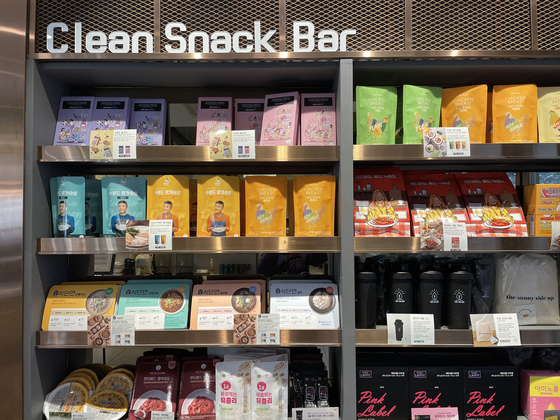 
The noodles are available from online market Hello Nature and offline restaurant Sun The Bud. Prices start from 7,500 won ($6.90) per package.

Pulmuon released its noodles made with dubu earlier this year. The company said it is difficult for them to track down how much sales have jumped as the products are selling as soon as they are made, and it said it plans to increase the capacity of the facility that makes the particular product.

The noodles, similar to dried tofu widely used in Chinese dishes, are easy to stir-fry, boil and mix with soy sauce and any other types of marinades with vegetables.

Spurred on by the enthusiastic response, the company also released soft dubu cheese gratin, giving a normally heavy dish a lighter makeover. There are two options available — one with Bolognese and one with pomodoro sauce. A package of the gratin costs 4,900 won, while the dubu noodles are priced around 2,600 won. 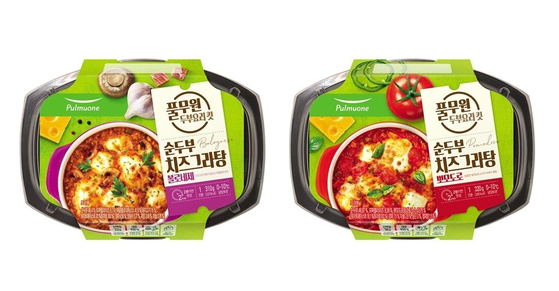 
The increased interest in healthier food options has also been seen on the major grocery delivery outlet Market Kurly. From January to Dec. 4, diet products and lower-calorie options increased steadily by 8 percent each month, with the highest sales seen in October.

Salad took up about 58 percent of sales of all health-related products sold on Market Kurly, followed by products with chicken breast and other boxed meals for dieting.

For a single product, Light Noodle from Pulmuone, another low-calorie noodle product popular among dieters, marked the highest sales, followed by mixed vegetables used in salads and chicken breast.

“As the time people spend at home elongates, it seems like consumers are buying more low-calorie products as a way to take charge of their diet and get their weight under control,” said a communications team member at Market Kurly.

“They also seem to choose many different pre-made salad boxes since it is difficult to prepare different vegetables together as well as sauces, and the same goes for a variety of boxed meals with lower calories.”

To try some healthier alternatives prepared by professionals, you can visit restaurant Sun The Bud in Cheongdam-dong of southern Seoul’s Gangnam District, which offer a variety of low-calorie, high-protein dishes. High-protein noodles are available along with rice products, such as tteokbokki (sticky rice cake covered in a spicy sauce made with hot pepper flakes and paste) that are made from brown rice rather than white rice.