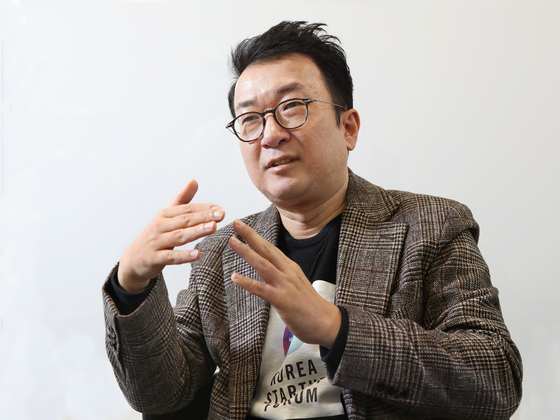 
This year has been a rough one for companies of all size, from start-ups to major corporations. With a torrent of bad news mostly related to the coronavirus pandemic, some of the most highly anticipated initial public offerings have been cancelled and SoftBank’s Masayoshi Son, a well-known venture capitalist, issued a public mea culpa regarding his investment in struggling “unicorn” units such as WeWork.

Choi Sung-jin, executive director of the Korea Startup Forum, however, said that despite the difficult conditions, the start-up community has seen steady growth and could grow further as regulatory conditions become more favorable.

Founded in 2018, the Korea Startup Forum is an association representing about 1,500 start-ups in Korea, including Baedal Minjok, Market Kurly and Toss.

The Korea JoongAng Daily sat down with Choi to assess the performance of tech enterprises and discuss important issues to be resolved in relation to the start-up ecosystem. The following are edited excerpts.


Q. Start-ups at home and abroad have been facing a multitude of challenges, and some media outlets talk of “startup bubble.” What do you make of this assessment?

There has been the failure of some listings and talks of a tech bubble since last year. But I think we are not in the bubble and on track to grow from a bigger perspective.

We experienced a dotcom bubble back in 2000 when investor sentiment plunged. That happened because smaller tech companies had developed into mega companies on an unprecedented scale for about 10 years. Major tech companies — the likes of Google, Amazon, Naver and Kakao in Korea — were born during that bubble period. The tech boom seen now is the result of a mobile revolution driven by Apple’s first-generation iPhone that took place around 2010.

But we still need to be cautious of not being overenthusiastic [about unconfirmed companies or technology], as in the case of U.S. start-up Theranos. But the Theranos case was more of an illicit scheme — there should have been investors prudent enough to verify the company’s promise.

The failed listing of WeWork indicates that that specific business model is hard to “be platformized,” rather than proving the competitiveness or unfair valuation of start-ups.


Q. To nurture a flourishing start-up ecosystem, the investors’ role is also critical. What is your view on Korea’s venture investment environment?

A. The Korean investment circle needs to become more competitive. Korea has 13 so-called unicorn startups with a current valuation of $1 billion or more. But those successful start-ups heavily rely on foreign capital.

This is not necessarily bad, but Korean investors need to take more bold actions in looking for promising start-ups and making investment. Most government-led funding or investments are focused on start-ups in the initial stage, but the arrangement needs to be more diverse to serve start-ups at different stages.

Another aspect comes from Korea’s capital markets that tend to be conservative and somewhat stringent when evaluating start-ups. For a start-up to exit, it needs to either merge, be acquired or go public. But because of the capital markets unfavorable to start-ups, there are few success stories in Korea.

Foreign markets like the Nasdaq, for instance, factor in the potential underlined in a start-up’s strategy and technology as well as financial status. But the Korean markets heavily rely on current financial records, making investors reluctant to funnel money into companies without significant profit.

This is also why successful players like Baedal Minjok are taken over by foreign companies. If the food delivery start-up was to be listed in Korea, its valuation would have to be lowered.


Q. What do you think is the most pressing issue for Korea?

A. We need to build up entrepreneurship in the start-up community. When we hear the word "entrepreneurship," we tend to understand it as an ability to manage a company. But it is more linked to the capacity to solve problems.

The world faces a lot of large-scale challenges such as persistently low growth rates and shrinking populations. But we are living in a country where more than 50 percent of graduates opt for proven tracks, pursuing jobs in the public sector or licensed professions like lawyers or medical doctors. The big problems can’t be solved in a society like this when everyone has a mindset of low risk and low return. Someone has to take a risk to get it done.

This tendency is connected with the fact that Korea has only a few self-made businessmen compared to the United States and China.

But the start-up ecosystem could be more suitable for resolving the big issues because an innovative mindset is the basis. Big corporations, however, would find it hard to move nimbly to change and respond to those problems.


Q. Korea has a reputation for being tech-savvy and having technology prowess. Where does Korea stand in terms of the competitiveness you mentioned?


A. I don’t think there is a widely-used, certified index to measure competitiveness in entrepreneurship. Overall, Korea is faring well in the tech sector in terms of the number of unicorns as it ranks in the 5th or 6th place, after the United States, China, Britain, India and Germany.

Its standing is lower in indexes related to readiness in regulations for start-ups or technological advancement.

To improve our competitiveness, it is critical to bring skilled people into the sector. Korea is known for having abundant human resources, but not many land jobs with start-ups. The main reason for the less preferred status lies in the image that positions at start-ups can’t deliver a good salary and stable conditions.

College graduates also get cold feet and prefer household names because of the social stigma attached to any type of failure, but they need to know that Google and Facebook were all once start-ups.

Also, the government should keep improving the social safety net and providing supportive measures to ensure that failures can be fixed.


Q. The Korean government appears to be at a crossroads in its approach to the start-up landscape. It often says that the government is willing to remove obstacles facing start-ups and innovation, but companies often complain about rules and regulations. What kind of stance should the government take?


A. I acknowledge that the Moon Jae-in government has been trying to create a favorable regulatory environment for start-ups to some degree by adopting programs like “regulatory sandbox.” The sandbox policy helped ease the gap in timing between the sluggish pace at which laws are made and the speed at which new technologies are adopted.

But more should be done. Some 30 to 40 percent of services available outside of Korea would not have gained approval here, according to a study done by Asan Nanum Foundation and Korea Startup Forum. Big start-ups like Uber and Airbnb were banned from executing some of their major businesses, adjusting to offer just a limited service.

To iron out the problem, the government should take on the negative regulatory approach by allowing everything unless otherwise forbidden. The approach is taken by many other countries including the United States. Currently, the government agency should come up with a whole new set of regulations whenever a new type of service or business arrives.

Even when carrying out the sandbox problem, we’ve seen some issues.

For example, when the new businesses under the program have conflicting interests with existing industry players, the government tends to side with the existing ones.

The most striking example is the conflict between Tada and taxi drivers, which ended up with Tada losing. But if the government keeps blocking new, smaller players, we can’t be competitive and will fall behind other advanced economies.

I am not saying regulations are useless. They should monitor misconduct. But the rules shouldn’t stand in the way of innovation, which is the case in Korea.

In this sense, I think the sandbox program should extend to benefit more start-ups because it will take time to rethink the whole regulatory approach.


Q. Is there a specific technology sector under the influence of heavier regulation?


A. So-called legal tech — technologies designed to offer legal services — is not thriving in Korea, although it is considered lucrative and flourishes overseas. In the medical sector, Korea strictly bans all types of telemedicine — both diagnosis and treatment. This is problematic because one can’t even start a business due to the regulations.

It would be okay if other countries had comparable rules, so all companies were held back. But many countries open the door to those banned areas, allowing early movers to take up a dominant market share. By the time Korea contemplates the existing rules and finally lifts them, Korean start-ups are already at a disadvantage due to the belated entry.