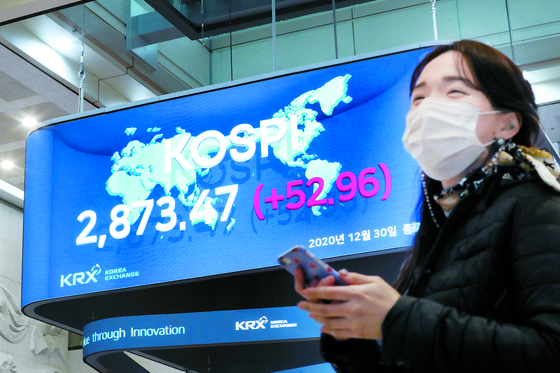 A digital signboard at the Korea Exchange in Yeouido, western Seoul, shows the Kospi closed at 2,873.47, up 52.96 points compared to the previous trading day, on Wednesday, which is this year's last trading day. [NEWS1]


Seoul's main bourse skyrocketed to over 2,870 on Wednesday, the last trading day of the year, led by blue chip gains.

The index has been gaining for five consecutive sessions, hitting record highs since Thursday last week when the index first passed the 2,800-mark.

The benchmark index plunged as low as 1,457.64 in March when the first wave of the coronavirus pandemic hit the country, then bounced back to an all-time high of 2,873.47 on the year's last trading day. It is a 97.13-percent jump.

The bullish index ends the year nearer to 2,900 than 2,800, adding confidence to earlier projections by multiple brokerage houses that next year's Kospi could pass 3,000.

The gain was led largely by blue chips including market bellwether Samsung Electronics.

Samsung Electronics has been growing fast this year on expectations of strong chip exports. Its shares have shot up by 46.73 percent this year.

Among the top 10 listed companies by market capitalization, all grew except for Celltrion.

The local currency closed at 1,086.3 won per dollar, up 5.8 won from the previous session's close.

Bond prices, which move inversely to yields, closed lower. The yield on three-year bonds increased by 0.7 basis points to 0.979 percent according to a market brief from the Korea Exchange (KRX).

The first trading session of the new year, on Jan. 4, will begin an hour later than usual at 10 a.m. The closing time will be the same, at 3:30 p.m., according to KRX.