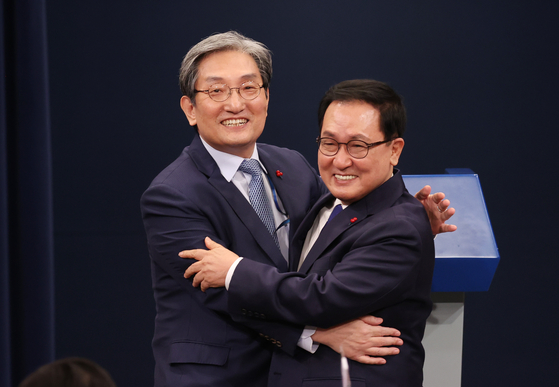 Outgoing Presidential Chief of Staff Noh Young-min, left, and his successor, You Young-min, hug after a press conference announcing the replacement at the Blue House on Thursday. [YONHAP]


President Moon Jae-in on Thursday named You Young-min, a longtime businessman and former science minister, as his new presidential chief of staff, while retaining his embattled policy chief Kim Sang-jo.

Noh described You as a “virtuous leader” in economic, administrative and political affairs. He is the best person to command the presidential secretariat, tasked with overcoming the Covid-19 pandemic, reviving the economy, implementing Moon’s “New Deal” projects and leading the fourth industrial revolution, Noh said.

A native of Busan, You, 69, started his career at LG Electronics in 1979. He climbed the career ladder to serve as the vice president of LG CNS from 2004 till 2006. He then left LG to serve as the head of the Korea Software Promotion Agency until 2008. From 2011 until 2013, he was a senior researcher of the Posco Research Institute.

After Moon took office in May 2017, You was appointed as his first minister of science and ICT, a post he held until September 2019.

“I am heavy-hearted to serve this job in this grave time,” You said. “I will work speedily and effectively, and constructively operate the secretariat through unity and coordination. Most of all, I will listen to the public sentiments and diligently relay them to the president.”

“You is known for his professional capabilities as well as sociability,” said Chairman Lee Nak-yon of the ruling Democratic Party (DP). “He is known for his friendliness and ability to tackle complicated matters.”

Shin is replacing Kim Jong-ho, who resigned Wednesday to take responsibility for his part in the power struggle between the administration and Prosecutor General Yoon Seok-youl.

Noh said Thursday that the government will have to prepare follow-up reform measures for the criminal justice system because the new Corruption Investigation Office for the high-ranking public servants will launch next year and major changes in the national police system and the NIS will take place.

“Shin had worked with the president in the Blue House when Moon was the senior presidential secretary for civil affairs, so he shares [Moon's] philosophy on reform,” Noh said. “He also led the reform of the NIS in the Moon government. With such experience, he will complete the reform of powerful state agencies.”

You and Shin will start work Friday.

While Moon replaced his chief of staff and senior secretary for civil affairs, he retained Chief of Policy Kim Sang-jo, who oversees economic and social policies. Kim had also tendered resignation on Wednesday to take responsibility for some failed policies, including real estate measures. 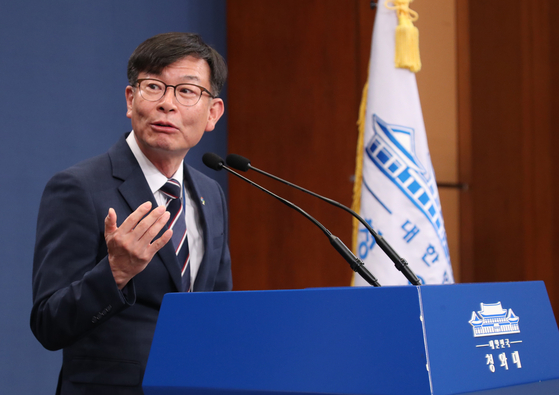 In this file photo, Kim Sang-jo, presidential chief of policy, gives a media briefing at the Blue House on June 21, 2020. [YONHAP]


“The president said it is not the time to replace Kim, because of the mounting pending issues such as the upcoming payout of disaster relief funds and prevention and control measures for Covid-19,” said Chung Man-ho, senior presidential secretary for public affairs.

The decision defies widespread public anticipation that Moon would replace his policy czar, as the administration has faced criticism for its failure to cool off skyrocketing home prices and for its slow vaccine procurement. Moon’s approval rating has been plummeting as public frustration grew in response to the real estate market and the progress of vaccine purchases.

Earlier this month, Moon replaced his land minister and his health and welfare minister, fueling expectations that Kim would also be sacked.

A senior presidential source said Moon rejected Kim’s resignation, indicating that Kim will remain on the job for some time.