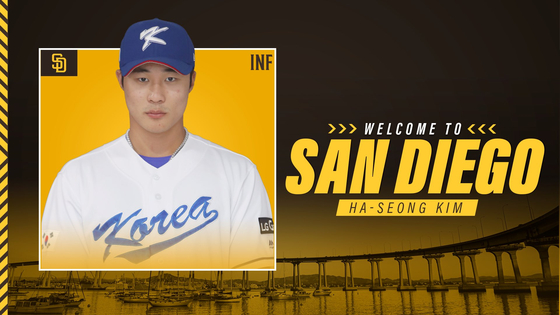 
The San Diego Padres confirmed that they have signed Korean infielder Kim Ha-seong on a four-year-deal on Thursday.

Kim, formerly of the Kiwoom Heroes, is reportedly set to make $28 million according to MLB.com. The deal includes a mutual option for the 2025 season.

The Padres will also have to pay a $5 million release fee to the Heroes.

Kim was drafted by the Heroes during the 2014 rookie draft. He made his KBO debut in his rookie season, appearing in 60 games and finishing with a .188 batting average with nine hits and 17 runs.

Despite a slow start, he started playing full-time in his second season in 2015, as the club was missing star infielder Kang Jung-ho, who had gone to the major league.

Having earned that starting spot in 2015, Kim has gone from strength to strength and quickly became known as one of the top infielders in the KBO. He was also part of the Korean national team back at the Premier 12 in 2019.

Kim had perhaps the best season of his career last year, finishing with a .306 batting average with 111 hits and 30 home runs throughout 138 games. Kim bulked up over the offseason after the 2019 season and the result showed, with a career-high 30 home runs. That number stands out, as his previous best was at 23.

Despite bulking up, he didn’t lose his speed, as he still managed to steal 23 bases throughout the season.