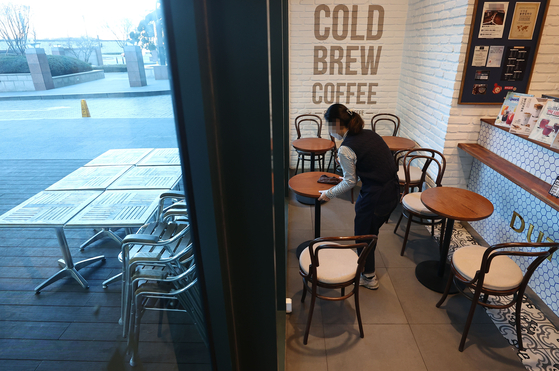 A worker at a coffee shop in downtown Seoul wipes tables Sunday, a day before customers will be allowed to eat and drink at cafes in Seoul, Incheon and Gyeonggi. [YONHAP]

Starting Monday, people in the Seoul metropolitan area will be allowed to eat and drink in coffee shops and go to the gym.

The eased restrictions came in response to mounting protests from small-business owners who had been forced to shut down for over a month as daily coronavirus cases peaked last month.

But even though restrictions will be eased, the Seoul metropolitan area’s social distancing level will remain at Level 2.5 for at least two more weeks, the second-highest level in the central government’s five-tier social distancing scheme.

Officials over the weekend warned that the country’s daily coronavirus cases, which mostly come from the Seoul metropolitan area, haven’t fallen enough for authorities to consider placing greater Seoul at Level 2 yet.

For the Seoul metropolitan area to be lowered to Level 2, Korea would first need to have fewer than 500 new Covid-19 infections a day on average for a week, officials said. Over the past week, the daily average was 516 patients, said Health and Welfare Minister Kwon Deok-cheol in a briefing Saturday. 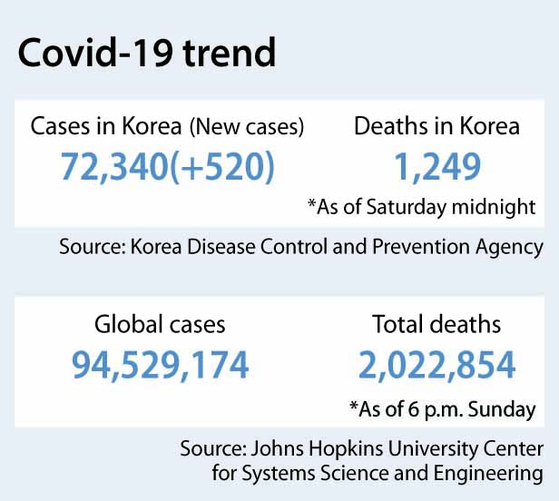 Korea added 580 new cases on Friday and 520 on Saturday, according to data released by the Korea Disease Control and Prevention Agency (KDCA).

The rest of the country outside the Seoul metropolitan area will remain at Level 2 for at least two more weeks, with some local governments choosing to implement Level 2.5 for specific areas.

According to the latest set of social distancing guidelines, the ban on gatherings of five people or more applied to the entire nation will be extended for two more weeks. That includes company outings.

In the greater Seoul area, the following measures will be imposed.

Coffee shops, which had been providing only take-out services, will now be allowed to let customers eat and drink inside their facilities until 9 p.m. People will be strongly recommended to stay only up to an hour if they’re with others, and masks must be worn at all times except when eating or drinking.

Cafes that are 50 square meters (538 square feet) or larger must space out their customers by leaving every other seat or table empty, setting each table one meter apart from each other or setting up plastic dividers.

Gyms can reopen, but must stay closed between 9 p.m. and 5 a.m., and accept only one customer for every 8 square meters of space. Sweaty group exercise programs offered at gyms such as Zumba, Spinning and aerobics will remain banned.

Noraebang (singing rooms) and hagwon (private cram schools) can reopen as well, but can accept only one customer for every 8 square meters of space.

Houses of worship can resume in-person services under the condition they fill no more than 10 percent of seats. All sideline events, such as prayer group meetings and meals, will remain prohibited.

Restaurants still can’t allow anyone to eat inside their facilities between 9 p.m. and 5 a.m. Hotels, resorts and guesthouses must continuously keep one-third of their rooms vacant. Clubs and bars that involve table-hopping must remain shut.

With a month left before Seollal, or Lunar New Year, health authorities said they are planning yet another set of special social distancing measures to go into effect from Feb. 2 to 14. Like last year’s Chuseok harvest festival, people will be strongly advised not to visit friends and family and stay at home.

Among the 520 people who were diagnosed with the coronavirus on Saturday in Korea, 500 were due to domestic transmission, KDCA data showed.

The remaining 20 cases were imported — six from the United States, two each from Indonesia, the Maldives, the Czech Republic and one each from the Philippines, Uzbekistan, India, Russia, Britain, Poland, Sweden and Mexico.

Thirteen patients died Saturday, raising total deaths to 1,249, while 699 patients recovered, bringing total recoveries to 58,253. As of Saturday at midnight, Korea had recorded 72,340 Covid-19 patients in all.