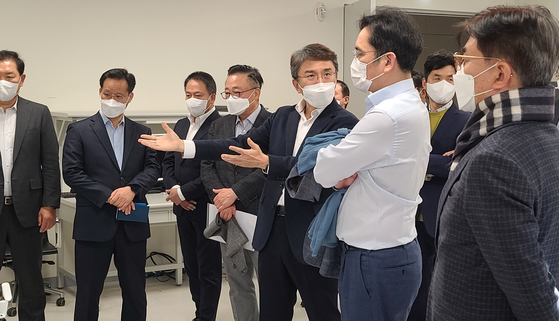 Lee was briefed about progress in the development of 6G technology, new AI-based services and technologies supporting servers used for network equipment, according to the electronics company, during the meeting held at the firm's research center in Woomeyon-dong, southern Seoul.

Key figures at Samsung participated in the meeting, including CEOs Koh Dong-jin and Kim Hyun-suk and Sebastian Seung, president at Samsung Research.

This is the latest in a series of visits from Lee to major Samsung facilities.

He moved to another research center located in Suwon, Gyeonggi, on Tuesday to monitor production lines for network equipment there and preside over a meeting.

“Acquiring new technologies is the key to survival,” Lee is quoted as saying in a statement released Wednesday. “Let’s pull together all resources to enhance the value of the company and contribute to society with responsibility.”

Samsung explained that Lee’s moves are intended to allow the company to quickly respond to the fast-changing business conditions in the pandemic era.