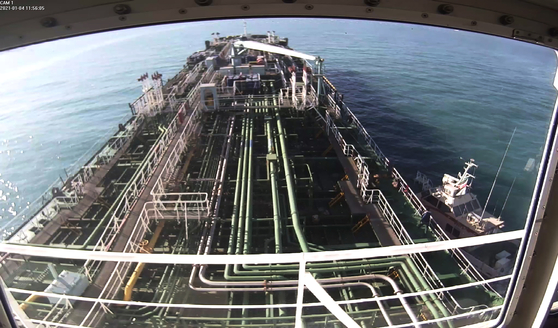 A CCTV image shows the moment the South Korean-flagged oil tanker Hankuk Chemi was captured by the Iran’s Revolutionary Guard in a speedboat on the Strait of Hormuz on Monday. [AP/YONHAP]


Seoul’s Ministry of Foreign Affairs said Wednesday that it is preparing legal action in response to Iran's seizure of a South Korean-flagged oil tanker in the Strait of Hormuz earlier this week, casting doubt on Tehran's claim that the ship was polluting the waters.

First Vice Foreign Minister Choi Jong-kun, set to visit Tehran soon, attended a closed-door emergency meeting of the National Assembly’s foreign affairs committee about the seizure of the vessel as lawmakers asked whether the move was linked to Iranian funds frozen in Korean banks due to U.S. sanctions.

The Foreign Ministry said in a parliamentary report that it is currently reviewing legal measures and will examine the veracity of Iran’s accusation that the tanker had been polluting the waters. It will also review whether the ship had been in international or Iran's territorial waters and whether Iranian forces had abided by international law in the seizing of the vessel.

Iran’s Islamic Revolutionary Guards Corps seized the MT Hankuk Chemi, which had 20 crewmembers aboard and had been traveling to the United Arab Emirates from Saudi Arabia, in the Persian Gulf Monday. Iranian authorities cited chemical and environmental pollution issues, accusations that were immediately rejected by the Busan-based operator of the vessel, DM Shipping.

“The Iranian side emphasized that this was a technical issue rather than a political one,” said Song. “However, I can’t help but suspect that behind this is the asset issue.”

Iran holds some $7 billion in two Korean banks — the Industrial Bank of Korea and Woori Bank — which have been frozen since September 2019, when U.S. sanctions waivers for Korea's imports of Iranian oil expired after Washington withdrew from the 2015 Iran nuclear deal the previous year.

Song said, “The ship’s operator claimed that the vessel has not released any pollutants. If it had released pollutants, this could be confirmed through satellite or helicopter images, but that was not the case.”

The Foreign Ministry has requested Iran through diplomatic channels for evidence of the alleged environmental pollution.

The ministry said the Korean vessel would not have been in violation of international law unless there was proof of an “act of deliberate and grave contamination.”

On speculation that the seizure was linked to either the frozen assets, the Cheonghae Unit’s deployment in the region, or to send a message to the United States, the ministry said, “It is unnecessary to speculate at the current stage,” while adding that “all possibilities are being left open as we concentrate our capabilities on resolving the current situation.” 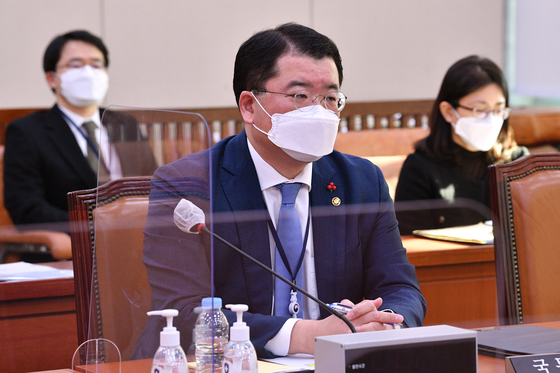 First Vice Foreign Minister Choi Jong-kun attends a meeting of the National Assembly’s Foreign Affairs Committee on Iran’s seizure of a Korean oil tanker in the Strait of Hormuz Wednesday in Yeouido, western Seoul. Choi is scheduled to kick off a trip to Iran Sunday. [NEWS1]


The focus is now on Korean Vice Foreign Minister Choi’s three-day trip to Tehran, scheduled to kick off Sunday and expected to involve discussions on how to handle Iran’s assets in Korean banks.

The trip had been scheduled prior to the ship’s seizure and comes as the Korean government has been working to find a solution around U.S. sanctions.

Those efforts by Korea included requesting a sanctions waiver from the U.S. Treasury to use the frozen Iranian funds to purchase Covid-19 vaccines through the Covax Facility, according to Seoul officials.

Iran rejected allegations that it seized the Korean ship as leverage amid tensions with the United States, while admitting to frustrations over the frozen assets.

Ali Rabiei, an Iranian government spokesman, said in a press conference Tuesday, “If there is any hostage-taking, it is Korea’s government that is holding $7 billion which belongs to us hostage on baseless grounds.”

Korea will send a separate delegation headed by Koh Kyung-sok, the director-general for African and Middle Eastern affairs at the Foreign Ministry, to negotiate the release of the ship and its sailors early Thursday.

But Iran’s Foreign Ministry spokesperson Saeed Khatibzadeh said that ship seizure will be addressed by related legal agencies and does not require a diplomatic visit.

Khatibzadeh was quoted by Iran’s Tasnim News Agency as saying, “The two countries have not reached any agreement on a separate visit between the two sides because this issue is running its defined legal course within a technical framework, and there is no need for a diplomatic visit,”

Vice Foreign Minister Choi’s visit has “nothing to do with the issue” of the ship seizure, said Khatibzadeh, confirming that the trip had been arranged beforehand.

“The South Korean government’s behavior in this regard is not understandable and is rejected,” he said.

Khatibzadeh maintained that the ship seizure was a “completely technical” problem and urged Korea to deal with the issue “logically and responsibly,” adding that Iran is “very sensitive about protecting its marine environment and deals with any violations in accordance with the law.”

There were five South Koreans, including the captain, 11 Burmese, two Indonesians and two Vietnamese aboard the seized ship, reported to be held at Iran's Bandar Abbas port. They are said to be safe and healthy, according to Iranian Ambassador to Korea, Saeed Badamchi Shabestari, who was summoned by Seoul’s Foreign Ministry Tuesday.

The Korean Defense Ministry on Tuesday dispatched its Cheonghae Unit, which conducts antipiracy missions in the Gulf of Aden, to the Strait of Hormuz, the strategic waterway located between the Persian Gulf and the Gulf of Oman. The 4,400-ton Choi Young had been conducting a mission in waters near Oman, and the 300-strong unit will support related agencies working on the release of the Korean ship.

The Korean Foreign Ministry said that it plans to cooperate with the United States and the European Union, as well as neighboring countries friendly with Iran including Qatar and Oman and the home countries of the sailors on the seized ship — Vietnam, Myanmar and Indonesia — for the ship’s early release.

The U.S. Treasury Tuesday imposed fresh sanctions on 17 companies and one individual in connection with Iran’s steel industry, claiming the Iranian regime used the revenue to fund “destabilizing activities around the world.”

On Wednesday, the U.S. military flew nuclear-capable B-52 bombers to the Middle East in a show of its “commitment to regional security and demonstrate a unique ability to rapidly deploy overwhelming combat power on short notice,” according to a statement from U.S. Central Command.

Gen. Frank McKenzie, the commander of U.S. Central Command, said in a statement that the deployment was meant to “deter any potential adversary and make clear that we are ready and able to respond to any aggression directed at Americans or our interests.”

Iran announced Monday that it had resumed enriching uranium to 20 percent purity, further moving away from the 2015 Iran nuclear deal.