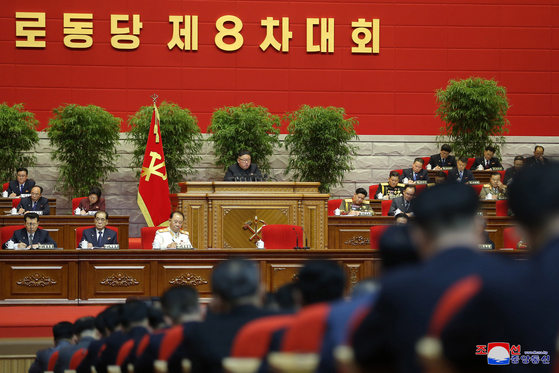 North Korean leader Kim Jong-un delivers a speech at the second day of the 8th Party Congress on Wednesday, as shown in this state media photograph. [YONHAP]

Continuing his report to the 8th Congress of the ruling Workers’ Party for a second day, Kim spoke of key industries in a new five-year plan, according to the official Korean Central News Agency (KCNA).

Kim’s speech on Wednesday did not appear to depart significantly from his opening address to the congress Tuesday, when he admitted the last five-year plan had fallen “extremely” short of its goals.

It did, however, clarify “an important will to reliably protect the security of the country and people and the peaceful environment of the socialist construction by placing the state defence capabilities on a much higher level, and put forth goals for realizing it,” KCNA said.

A detailed account or transcript of Kim’s speech on the second day were not made available by KCNA. The Rodong Sinmun, the party’s official newspaper, carried Kim’s address on its front page but also had little detail as to his exact remarks.

KCNA ended its coverage of the event saying the “report continues,” suggesting Kim would continue his report for a third day on Thursday.

Foreign observers are closely watching whether Kim will address foreign and inter-Korean affairs in response to the change in administrations in the United States.

North Korea has not made any official response since Joe Biden beat incumbent President Donald Trump in November, despite its certain implications on the stalled denuclearization talks between Pyongyang and Washington.

With Biden set to take office on Jan. 20, the congress was widely anticipated by North Korea watchers as a venue for Kim to announce a new position in regards to foreign policy and the nuclear program.

South Korean experts say the slow pace of Kim’s report suggests the congress may extend up to six days, opening the possibility that foreign and peninsular policies would emerge in later sessions. 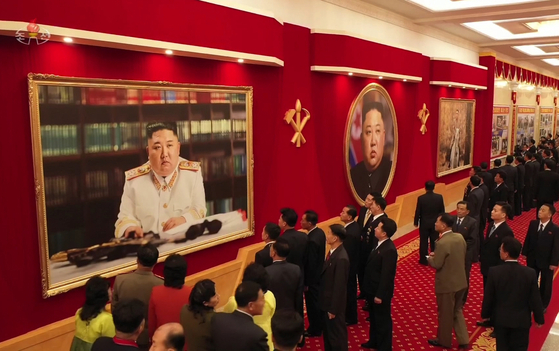 Delegates attending the 8th Congress of the Workers' Party in Pyongyang admire Kim Jong-un's portrait in marshal regalia, as shown in this state media photograph. [YONHAP]


This would make the event longer than its previous iteration, the 7th Party Congress in 2016, which went on for four days from May 6 to 9. In that event, Kim’s report ran for only two days. The seventh congress also concluded with a resolution in which the regime labelled itself a “nuclear power” and said it would continue building on its nuclear arsenal for its strategic aims.

But coming after a disastrous year for the economy — hit with continuing sanctions, serial natural disasters and a border shutdown prompted by the pandemic — the eighth congress so far concentrated on economic themes, with Kim acknowledging the regime needed to change from within.

The reference to defense capabilities in the KCNA report, cushioned in relatively light language, also could signal the regime’s desire to cool tensions in the region, experts said.

“The fact that softer expressions like ‘defense capabilities’ and ‘peaceful environment’ were used in lieu of provocative terms like ‘defensive nuclear weapons’ or ‘war deterrence’ connotes a desire to control provocation levels,” said Yang Moo-jin, a professor at the University of North Korean Studies in Seoul.