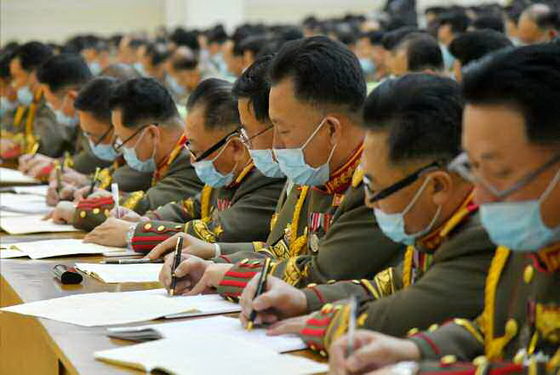 North Korean military officials take part in a meeting at the Eighth Workers' Party Congress in Pyongyang on Monday, according to this state media photograph. Delegates wear face masks, unlike in sessions headed by Kim Jong-un. [NEWS1]

Strangely enough, photographs published in state media showed all participants at these various meetings wearing face masks — in contrast to their maskless attendance at main sessions of the congress presided over by leader Kim Jong-un.

The smaller “consultative meetings,” as the official Korean Central News Agency (KCNA) called them, discusses specific economic and social areas, including education, public health, the arts, as well as military affairs and the munitions industry.

Delegates at the military meeting discussed “issues arising in implementing the important strategic tasks for strengthening the state defense capabilities, the cornerstone of the existence of our state,” KCNA said.

Little further detail was provided on what those issues were, though they are almost certainly related to Kim’s call for development of the regime’s nuclear and conventional arms on Friday.

The meetings also apparently focused on solidifying the party’s authority and instilling a “revolutionary climate” throughout lower ranks, perhaps in response to signs of looser discipline in recent years amid prolonged economic difficulties.

The smaller meetings worked on drafting different parts of a resolution likely to be approved at the final sessions of the congress, which began on Jan. 5.

State media on Tuesday publicized a congratulatory message from Chinese leader Xi Jinping on the occasion of the congress.

Labeling the message “of weighty importance” in an English-language report, KCNA said the message called on the two Communist countries to strengthen their strategic relations in “the situation in which the world entered a period of confusion and changes.”

The emphasis on the cordial ties between the two leaders highlighted Pyongyang’s desire to shore up Kim’s relationship with Xi, which got off to a rocky start when Kim rose to power a decade ago.

Kim met Xi for the first time in March 2018, just three months ahead of his summit with U.S. President Donald Trump, apparently to assure China it remained the North’s foremost partner even as it dealt with Seoul and Washington.

The relationship appears to have deepened as North Korea-U.S. denuclearization talks faltered, though China formally supported the process.

The North Korean question has also widened the global rivalry between Washington and Beijing, with U.S. officials openly criticizing the latter for its tacit support of smuggling activities by the North in violation of international sanctions.

And despite shrinking overall trade amid its border shutdown during the pandemic, Pyongyang’s economic dependence on China grew last year, with China helping to keep its economy going. 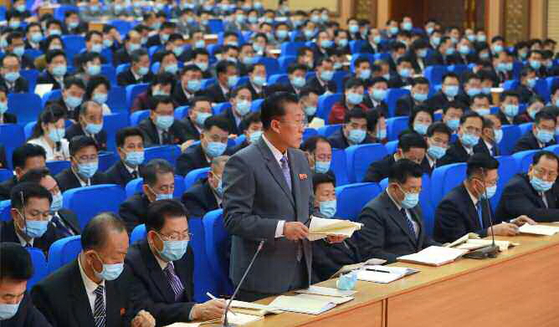 North Korean delegates take part in a smaller meeting at the Eighth Workers' Party Congress in Pyongyang on Monday, according to this state media photograph. Delegates are wearing face masks. [NEWS1]


There were no explicit reports by state media on Tuesday about a massive military parade held on Kim Il Sung Square Sunday night, as reported by South Korea’s military. The only possible reference to such an event was a KCNA report that said government and military officials were invited as special guests to “celebrations” of the eighth congress.

This unusual reticence from the regime suggests that Sunday’s event, detected by South Korean intelligence, may have been a rehearsal for a parade to be held on the last day of the congress.