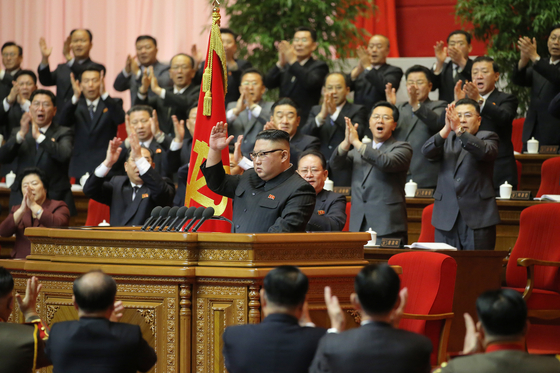 North Korean delegates cheer as General Secretary Kim Jong-un delivers an address to close the 8th Party Congress on Tuesday. The week-long gathering was the second longest congress in the country's history. [NEWS1]


North Korea wrapped up a week-long Eighth Workers’ Party Congress Tuesday with an address from leader Kim Jong-un proclaiming a redoubling of work on the regime’s nuclear program.

Bringing to a close the biggest political gathering in the country, Kim’s speech encouraged the modernizing and strengthening of the military to thoroughly prepare the country for “any form of threat or unjust situation,” according to the official Korean Central News Agency (KCNA).

It was a strikingly militant conclusion to an event analysts in South Korea hoped would contain an olive branch ahead of a new administration taking power in Washington. Instead, it confirmed the North’s persistent defiance of the American attempts at reining it in.

Though international scrutiny was concentrated on the antagonism displayed toward the United States, the congress had a strong focus on rectifying economic shortcomings that were painfully pronounced for the regime last year.

The resolution that emerged after seven days of speechmaking and conferences outlined new goals for the economy for the next five years, the KCNA said, though details were scarce.

Kim, whose title was changed from chairman to general secretary at the congress, noted the party needed to assert unified control over the economy, and crack down on all forces “undermining” state authority.

The latter reference was probably not aimed at market influences in the country, manifested in the jangmadang markets, which since the late 1990s have grown into a large informal economy that most North Koreans depend on for daily subsistence.

More likely, Kim’s censures were aimed at rampant corruption and other crimes committed by officials, and he ordered a clampdown on “antisocialist” behavior.

As for particular economic goals, Kim stressed the production of steel and chemical products, while also expanding the purchases of grain from overseas to ensure regular food supplies.

This directive on grain supply hinted at the regime’s food insecurity, which is estimated to be particularly serious this year given the natural disasters that disrupted agriculture over the summer. This, in addition to the crunch brought on by Covid-19 and ongoing international sanctions, have dented the regime’s fragile economy.

The congress also ended on an aggressive note Tuesday with a statement leveled against South Korea from Kim’s younger sister, Kim Yo-jong, slamming Seoul’s military for making predictions about a military parade underway in Pyongyang. 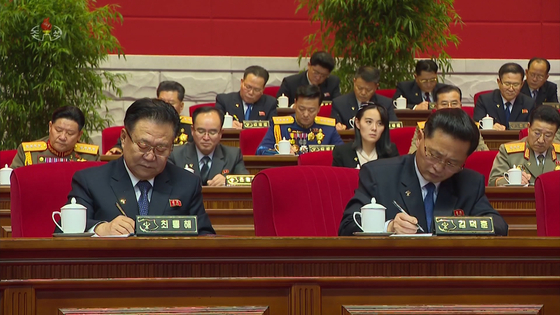 Kim Yo-jong, the younger sister of North Korea's leader, looks up while seated second from right in the second row among top officials during a session of the Eighth Workers' Party Congress this week, as shown in this screenshot from Korean Central Television. [YONHAP]


“This is a clear expression of the south Korean authorities' hostile approach toward the fellow countrymen in the north,” Kim said in an English-language statement carried by KCNA.

“Why do they take trouble craning their neck to follow what's happening in the north[?]”

South Korean authorities are “the idiot and top the world’s list in misbehavior,” she added, mocking Seoul for having “nothing else to do” but track celebrations in Pyongyang.

While typical of the regime’s usual vitriol, the statement stood out in light of Kim Yo-jong’s visibly diminished official profile at the recent congress. Contrary to analysts' predictions, the younger Kim was not mentioned among a list of alternate members of the party’s Central Committee Political Bureau, and her name was mentioned far down in the hierarchy.

While Kim Yo-jong may have been formally demoted, her capacity to slam the South in such language suggests that her influence in the regime remains significant.