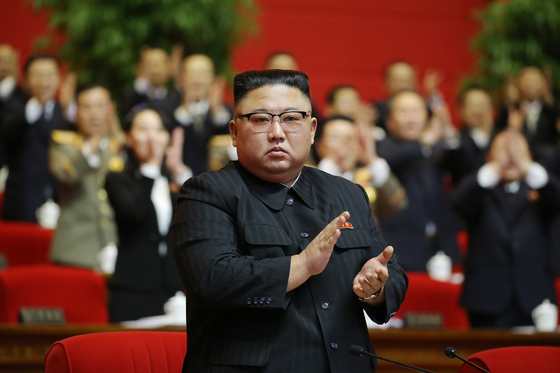 Kim, who came to power in 2011, was elected general secretary of the party “in reflection of the unanimous will and desire” of all delegates, party members, people and military, in the sixth session of the ongoing Eighth Party Congress, said the official Korean Central News Agency (KCNA) in an English-language report.

His elevation follows a decision by the congress announced Sunday that the country’s executive policy council would revert back to a secretariat, as it was prior to 2016. The general secretary is head of the secretariat and, therefore, the Workers' Party as a whole, replacing the post of party chairman.

Modeled after governing forms of the Soviet Union, the secretariat in North Korea heads the party’s internal apparatus and supervises the execution of party decisions. While it formally has no power over policymaking, which is the sole dominion of the Political Bureau, the secretariat is often staffed by Politburo members.

In its early history, the secretariat served an instrumental role in Soviet-appointed Kim Il Sung’s power struggle with other political factions in North Korea by strengthening his personal control over the party’s lower ranks.

When Kim Jong-il died in 2011, he remained enshrined in the country’s annals as the “eternal general secretary.” Kim Jong-un immediately succeeded his father as supreme leader, but his title at first remained first secretary of the party.

To allow his own prestige to match his predecessors, Kim reorganized the secretariat into the Executive Policy Bureau during the Seventh Party Congress in May 2016, the first such event held in 36 years. Kim was no longer first secretary now, but chairman of the party.

The decision to restore the secretariat system and install Kim as general secretary appears to have been triggered by an inflation of similar sounding leadership titles in the communist country, experts in South Korea say.

“The existence of too many ‘chairman’ and ‘vice chairman’ positions on all organizational levels under the Executive Policy Bureau system may have been deemed as diminishing Kim Jong-un’s own authority,” said Cheong Seong-chang, a leading North Korea researcher at the South’s Sejong Institute.

“By re-implementing the secretariat system, the title of general secretary is exclusive to Kim Jong-un, while the title for those in charge of regional party organizations will be changed from ‘chairman’ to ‘chief secretary,’ clearly different from Kim’s.”

Kim’s election as general secretary was also accompanied by sweeping personnel changes at top party organizations, according to the KCNA.

Most surprising was the exclusion of the leader’s younger sister, Kim Yo-jong, from a list of alternate members of the Political Bureau of the party’s Central Committee, on which she had served since 2017.

The younger Kim's profile had risen through the past year, seemingly taking charge of inter-Korean policy on behalf of her brother. Hers was the name attached to several important messages aimed at the South and the United States, including the one that led to the demolition of the inter-Korean liaison office in June.

Kim Yo-jong’s name was absent from even a list of directors of party organizations. Her exclusion from official policy-making positions may mean her public role has been reduced, but her position as a key adviser to her brother is unlikely to be affected, experts say.

By contrast, newly appointed to the country’s top decision-making body — the Politburo’s Presidium — was Jo Yong-won, making him one of just five, including Kim Jong-un.

Members of the Presidium of the Political Bureau of the Central Committee elected at the Eighth Party Congress Sunday, according to this image released by state media. [YONHAP]


Jo is a vice director of the party’s Organization and Guidance Department, a powerful body overseeing implementation of the leader’s directives. He has accompanied Kim Jong-un on trips around the country and is believed to be one of the dictator’s closest confidantes.

Others saw reversal of political fortunes. Kim Yong-chol, the spymaster who played an important early role in denuclearization negotiations with the United States and South Korea, was not appointed a member of the new eight-member secretariat.

Instead, he took up his old post as head of the United Front Department, a body in charge of diplomacy and espionage related to South Korea, replacing nonentity Jang Kum-chol.

In total, one of the five Presidium members, eight of the 19 Politburo members and seven of the 11 alternate Politburo members elected Saturday were new figures, marking a generational turnover of sorts in the regime’s top leadership.

Changes were also made on the military front. The Ministry of People’s Armed Forces was renamed the Ministry of Defense, with Kim Jong-gwan as its head.

To apparently celebrate the eighth congress and Kim’s new position, a giant military parade was carried out in the central square of Pyongyang on Sunday night, according to South Korea’s military on Monday.

Seoul’s Joint Chiefs of Staff said in a release that Kim Il Sung Square was the venue for a massive parade likely featuring the regime’s arsenal of new weapons. A similar parade took place last October to mark the 75th anniversary of the Workers’ Party.

North Korean state media have not yet reported on the parade, but it is routine for such reports to emerge a day after an event has taken place. Reports from KCNA and other outlets on the parade are expected on Tuesday morning.

This newest parade, which had been anticipated by North Korea watchers, was closely scrutinized in light of Kim’s announcement Friday that a host of new weapons were under development to beef up the country’s defense capabilities.

Having declared the United States the country’s “foremost principal enemy,” Sunday’s parade may also have been intended as a measured provocation aimed at incoming U.S. President Joe Biden, who is due to take office in just over a week.