With a new year comes new televisions, but acronyms like LCD, QLED and OLED can often be off-putting. In this episode of Shortcut we'll explore exactly what these different types of TV can do and what's next for the industry.


What do all these acronyms actually mean?

To better clarify, let’s see how these different types of TV actually fit together. 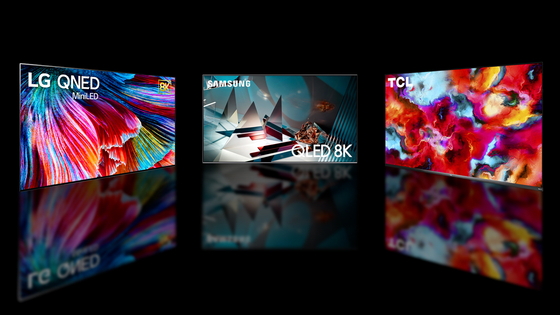 LCD is a good starting point because it is the most commonly used panel type. An important characteristic of LCD TVs is the need for a backlight behind the LCD sheet to render it viewable because liquid crystals themselves are not illuminated.

Samsung Electronics’ QLED TVs are a type of LCD display, using a quantum dot-based color filter on top of an LCD panel. The LEDs in this case are used as the backlight.

Using LEDs as a backlight is also the concept behind Mini LED TVs, which use smaller LEDs to provide more precise backlighting, producing better contrast and color. This makes Mini LED TVs the top tier of LCD TVs.

LG’s QNED, Samsung’s Neo QLED and TCL’s 6 and 8 Series are all based on the Mini LED technique, so they are all technically LCD TVs. 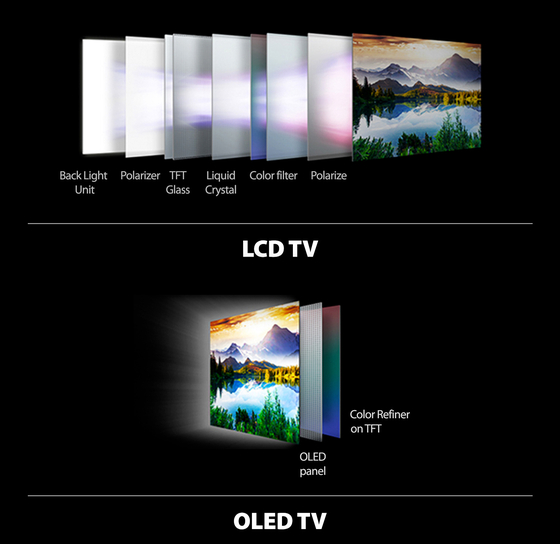 OLED is a very different concept, as a film of organic compound emits light directly without the need for a backlight.


The absence of a backlight delivers a whole range of advantages including improved contrast, rich color range and low energy consumption compared to other LCD-based TVs.

Still, OLED TVs tend to be susceptible to color degradation and screen burn-in, especially when exposed to sunlight over a long period of time.

LG Display is the pioneer in this technology, supplying its panels to LG Electronics and other manufacturers including Sony, Xiaomi and Vizio.

Micro LED TVs use tons of microscopic LEDs to form the individual pixel elements – not as a backlight but for the actual pixels, the same underlying principle seen in industrial signage.

A backlight is not needed since the microscopic LEDs can directly emit light. But since they are inorganic, they are less vulnerable to the image-burn issue.

So, it comes with the advantages of OLED TVs without their drawback. But the catch is they are extremely expensive and complex to manufacture. 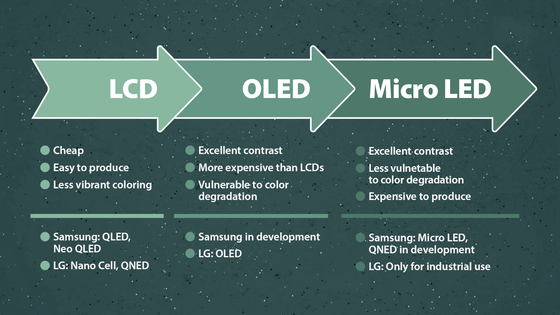 What's next for this technology?


Samsung Display, which is a display affiliate of Samsung Electronics, is developing its own OLED TV panels and another next generation display using nano-sized LEDs.

The panel maker vowed to invest a total of 13 trillion won into these new technologies through 2025.

With the massive funding, it will enter mass-production of OLED screens within this year.

But that doesn't necessarily mean Samsung Electronics will produce OLED TVs, although that is a possible option.

To differentiate itself, Samsung Display plans to apply its quantum dot-based color filter to its OLED panels to enhance brightness.

What about the nano-sized LED display technology developed by Samsung Display.


Some industry insiders see the upcoming display as a game changer because it doesn't need a backlight but is easier to assemble than Micro LED displays.


The display consists of blue light-emitting LEDs called Nanorod, so Samsung Display calls them QNED — not to be confused with LG’s LCD TVs of the exact same name.

Samsung's nano QNED TV panels use LEDs that are even smaller than those used in Micro LED TVs, but because of the way they are printed onto panels, they are more efficient to produce.

While a Micro LED TV has to be constructed from a number of different modules, a QNED nano LED TV can be printed as one whole panel, potentially making them more efficient and less risky to produce.


Which one is the best?

If we limit the answer to those on sale, OLED and Micro LED TV models easily surpass all LCD models in terms of picture quality thanks to their self-illuminating light sources.


For those concerned that OLED might not have a long enough lifespan, Samsung’s Micro LED might be the answer. But it comes at an extremely high price. They're also not readily available yet, since official sales are set for March only starting in South Korea.