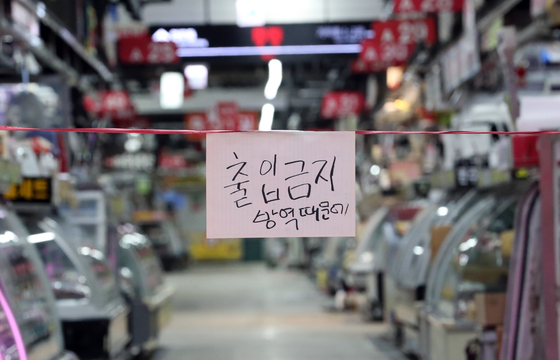 A sign bans entry to the Garak Mall in Songpa District, southern Seoul, on Sunday after four Covid-19 patients were confirmed in relation to the market. [NEWS1]


Korea’s Covid-19 cases remained below 1,000 for the sixth consecutive day as of midnight Saturday, but health authorities Sunday warned of new coronavirus variants abroad and continued local transmissions, including at the largest market in the country.

Four merchants working on the ground floor of the Garak Mall, a popular market in Songpa District, southern Seoul, were confirmed Covid-19 positive as of Saturday. One merchant worked in the fish section and the other three in the meat section.

The entire ground floor of the market was shut down Sunday for disinfection, shutting down some 360 vendors. Health authorities plan to test some 1,200 employees working at the ground floor.

Normally, 80,000 people go in and out of the market daily. Traditional markets have already been hit hard by social distancing measures since March, and an actual outbreak would be another blow to the Garak merchants.

Korea reported 665 new Covid-19 cases as of Saturday midnight, of which 631 were local infections and 34 were imported, according to the Korea Disease Control and Prevention Agency (KDCA) Sunday. 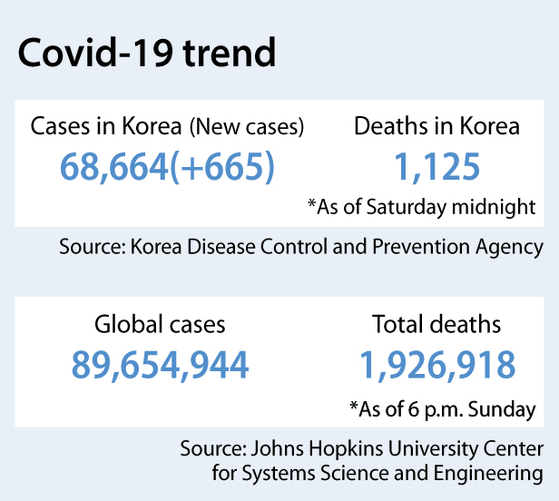 The cases in the past week ranged from 714 reported as of Monday midnight, 838 on Tuesday, 869 on Wednesday, 674 on Thursday and 641 on Friday, which marked the lowest daily cases since Dec. 8 when 594 cases were reported.

In the past week, the country recorded a daily average of 774 cases, falling below the standards for Level 3 social distancing measures, which requires over 800 cases.

Korea has so far reported a total of 16 cases of the new coronavirus variants, 15 from Britain and one from South Africa.

“Our most urgent task is to block the spread of the new Covid-19 strain in the country," said Chung.

The latest imported cases included four from the United States, six from Indonesia, four from India, two from Japan, two from Russia and one from South Africa.

The government is requiring a negative PCR test result from all incoming travelers. Flights from Britain are banned until at least Jan. 21.

Korea has extended Level 2.5 social distancing measures in the greater Seoul area and Level 2 in other regions to Jan. 17 and continues to prohibit gatherings of five or more people.

Health authorities said they want to bring daily cases to below 500 ahead of the loosening of social distancing measures. Businesses that have been shut under the current scheme such as gyms, private academies and singing rooms hope to reopen when the Level 2.5 measures are eased. Health officials say the country seems to have flattened the curve in its third wave of infections but continue to remain wary of clusters throughout the country.

Of the local infections in the metropolitan area, 179 cases were reported in Seoul, 189 in Gyeonggi and 32 in Incheon.

New cases were reported in all Korean cities and provinces except Sejong, including 32 in Busan, 34 in Daegu and 24 in Ulsan.

The Seoul Dongbu Detention Center in Songpa District produced 12 new patients following a seventh round of testing, bringing total cases linked to the jail to 1,192 as of Sunday.

Out of 2,837 people who have visited the church since late November, 154 members tested positive for the virus as of Saturday, according to the health officials. Of these confirmed patients, 45 were found to have spread the virus to at least 351 people in some eight cities and provinces by attending religious services and gatherings in those locations.