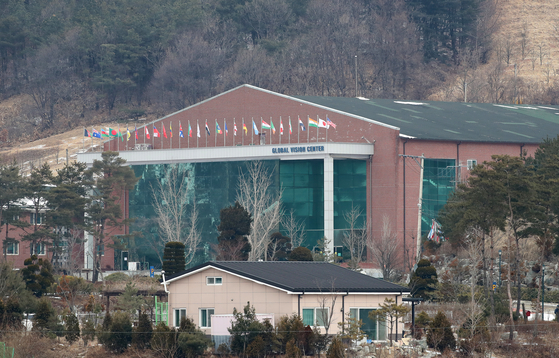 The BTJ School in Sangju, North Gyeongsang. At least 505 Covid-19 cases have been traced to the Protestant missionary school. [NEWS1]

Health authorities Monday urged recent visitors to a Protestant missionary school in Sangju, North Gyeongsang, to get tested for the coronavirus as soon as possible, warning that a growing cluster there could end up like the Shincheonji outbreak.

The Shincheonji Church of Jesus in Daegu remains Korea’s largest cluster of the pandemic, with 5,214 cases linked to the religious group. Though most infections were detected in Daegu and the surrounding province of North Gyeongsang early last year — from congregants who attended mass services — there was also a significant number of worshippers who had traveled from other parts of the nation. As they returned home, they spread the virus in their local communities.

In many ways, the new cluster at the BTJ School in Sangju, a missionary training school about 170 kilometers (106 miles) south of Seoul, resembles the Shincheonji outbreak, officials say — including the fact that attendees are dodging calls from health authorities to get tested.

What potentially makes the BTJ School worse than the Shincheonji Church of Jesus is that it held numerous large gatherings from last October through December, in defiance of repeated calls from the government not to convene at all and while Korea’s third wave of the pandemic was picking up steam.

An estimated 2,837 people are believed to have visited the BTJ School during that period, about 30 percent, or 872 people, of whom have been tested as of Saturday. Of those 872 people, 154 were confirmed to be infected, the Korea Disease Control and Prevention Agency (KDCA) said.

Forty-five people among the 154 went to spread the disease to over 350 other people at more than 20 religious facilities and social gatherings around the country, including in Busan, Incheon, Daejeon and Gwangju. In all, at least 505 people have been connected to the BTJ School.

The BTJ School is part of InterCP International, a Korea-based organization that runs several missionary schools and missionary training programs. Exactly where those programs are held isn't explained on the group’s official website, but a description of the BTJ School explains that the school offers lessons on “evangelism and discipleship,” “church planting” and “training on relationship and healing.”

BTJ stands for “back to Jerusalem.”

Some Protestant groups who’ve publicly spoken about the InterCP International in local media described the group as a cult. The CEO of Bareun Media, a news outlet that exclusively reports on religion and cults, suggested in a CBS radio show Monday morning that people who attended training sessions last year might be evading calls from the government to be tested because InterCP International has been spreading conspiracy theories about the coronavirus.

The CEO, Rev. Jo Mid-eum, claimed the missionary group thinks the coronavirus is intentionally being spread by an anonymous organization that wishes to “control the global population” to bring the world under a single government.

Local governments Monday warned they won’t be accepting any excuses and threatened legal action against anyone who fails to come forward to be tested.

Officials at the Seoul Metropolitan Government said they were contacting BTJ School visitors in the city to inform they need to be tested for the coronavirus, but that about 80 out of some 280 people were refusing to answer calls as of Monday, while 35 claim they have never visited the school in Sangju.

As of Sunday at 6 p.m., 480 people out of 724 in Gyeonggi have refused to answers calls to be tested, the provincial government said.

The lists of BTJ School visitors being used are based on information provided by the school.