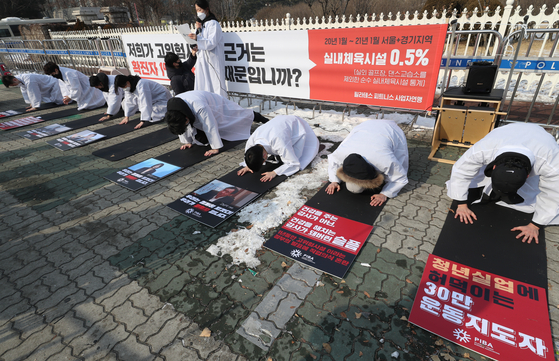 Representatives of a federation of Pilates and fitness center owners take a deep bow as they urge the government Tuesday in front of the National Assembly in Yeouido, western Seoul, to allow them to reopen their businesses. [YONHAP]

Korea added 537 new cases Monday, up from 451 the day before, yet markedly lower than a week ago when 715 cases were found.

This weekend, health officials are expected to announce whether any changes will be made to the current social distancing levels, which could mean changes in restrictions on local businesses.

The greater Seoul area — Seoul, Incheon and Gyeonggi — has been subject to Level 2.5 measures for over a month, while most of the rest of the country has been subject to looser Level 2 rules. There are five levels in the central government’s social distancing scheme: Level 1, 1.5, 2, 2.5 and 3.

Under Level 2.5, indoor sports facilities have been forced to close. Under Level 2, they’ve been allowed to operate throughout the day but not between 9 p.m. and 5 a.m.

Gym owners in greater Seoul have been clamoring for permission to reopen, some even suing the government for financial losses.

In response to their mounting complaints, health authorities last week allowed indoor sports facilities to reopen on the condition they limit people inside to nine, with all customers being minors. The logic behind the decision was that kids needed a place to go until their parents get off work.

As of Tuesday, a Blue House petition urging the government to allow indoor sports facilities to reopen has been signed by some 220,000 people in less than two weeks.

Exactly how the government will respond this weekend remains to be seen, but officials have been telling reporters off the record that they’re thinking about leaving the social distancing levels as they are, while allowing closed businesses to reopen under strict sanitation guidelines.

Representatives of a federation of Pilates and indoor gym owners said Tuesday that the government shouldn’t wait any longer.

They gathered in front of the National Assembly in Yeouido, western Seoul, Tuesday morning as temperatures plummeted to minus 6 degrees Celsius (21 degrees Fahrenheit), dressed in white gowns normally worn to mourn someone’s death.

Park Ju-hyeong, the federation’s head, said the dress was meant to send a message to the government that gym owners are “dignified” people, not a danger to society.

“The financial blow is huge,” said Moon Seong-yong, 35, who owns a Pilates center in the Seoul metropolitan area. “I’m kicking and screaming inside.”

Park chimed in, saying, “Even when we’re closed, we have to pay rent and spend money on living expenses. The government should allow all indoor sports facilities to reopen as soon as possible.”