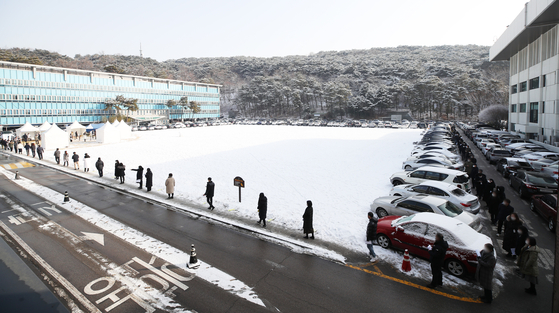 Civil servants line up to get tested for the coronavirus Wednesday at the Gyeonggi Provincial Government in Suwon, Gyeonggi. Some 12,000 officials at the office and other public organizations in the province are being pre-emptively tested for the virus this week. [YONHAP]

From Jan. 26, all people traveling to the United States will have to submit a negative Covid-19 test result before boarding their planes.

The U.S. Centers for Disease Control and Prevention (CDC) said Tuesday in a media statement that all air passengers will be required to get tested for the coronavirus within three days of their flights to the United States and give written documentation of their laboratory tests to the airline.

Airlines must confirm negative test results for all passengers before they board. If a passenger does not provide documentation of a negative test, the airline must not allow the passenger to board, the CDC statement read.

“Variants of the SARS-CoV-2 virus continue to emerge in countries around the world, and there is evidence of increased transmissibility of some of these variants,” said the CDC. With the United States “already in surge status, the testing requirement for air passengers will help slow the spread of the virus as we work to vaccinate the American public.” 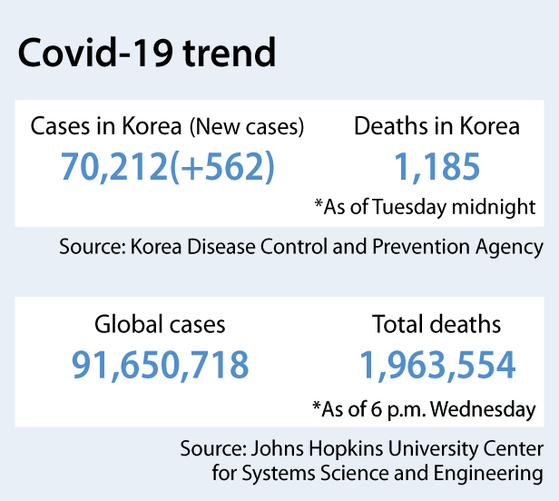 The CDC strongly recommended travelers to get tested again three to five days after arrival and stay home for seven days.

Daily coronavirus cases have been surging in the United States following the Christmas and New Year holidays, peaking at an all-time high last Friday with more than 300,000 cases detected.

Korea’s daily caseload Tuesday was 562, up from 537 the day before. The Korea Disease Control and Prevention Agency (KDCA) said most of Tuesday’s cases were found in Seoul and Gyeonggi.

No new Covid-19 infections were linked to a large cluster at BTJ School, a Protestant missionary training center in Sangju, North Gyeongsang, but as health authorities scramble to track down recent visitors, the state health insurer announced it would seek reimbursement for medical costs for patients connected to the religious group.

The National Health Insurance Service (NHIS) said Wednesday in a statement that the agency plans to cooperate with other health authorities and local government offices in pinning down every legal violation by the BTJ School in the days and weeks leading up to and following the outbreak.

Based on that review, the NHIS said it will work out a figure and subsequently file a claim for damages.

Sohn Young-rae, a spokesperson for the Central Disaster Management Headquarters, said in a Wednesday briefing that the central government would discuss with local government offices  seeking reimbursements for their shares as well, saying the idea was “worth a review.”

Health officials have been berating the BTJ School for ignoring social distancing measures by organizing mass gatherings and failing to quickly submit lists of attendees when asked.

The KDCA said an estimated figure of 2,797 people are believed to have visited the BTJ School from Nov. 27 to Dec. 27, when the virus is suspected to have spread among visitors who came for missionary training.

Of those visitors, 126 people tested positive for Covid-19 as of Monday midnight, of whom 53 people infected 450 others at 27 different houses of worship and social gatherings in nine major cities and provinces, including Incheon, Busan, Daejeon, Gwangju, Gyeonggi and Gangwon.

But this could be the tip of an iceberg, officials warn, given that nearly 70 percent of recent visitors to the BTJ School haven’t been tested for the virus at all. Many trainees aren’t answering their phones or are outright refusing to get tested.

Officials are desperately hoping the cluster doesn’t end up like the Shincheonji Church of Jesus in Daegu, to which 5,214 Covid-19 infections were linked early last year.

Prosecutors accused Shincheonji of stymying contact tracing efforts by omitting several names on their list of adherents when the cluster first arose, and not mentioning some Shincheonji facilities as health authorities tried to comb through each one of them.

Prosecutors also charged Shincheonji’s leader, Lee Man-hee, of embezzling some 5.6 billion won worth of church funds for personal use.

A court in Suwon, Gyeonggi, Wednesday acquitted Lee of the charge of botching contact tracing efforts, citing a lack of evidence that the church undermined government virus control measures.

The court, however, found Lee guilty of embezzlement, saying he used 5.2 billion won worth of church funds to build his home. The court gave him a three-year suspended prison sentence with four years of probation.

In a statement, the Shincheonji Church of Jesus said it “deeply regrets” Lee’s embezzlement conviction and hinted at an appeal.

Among 562 people who were diagnosed with the virus Tuesday, 536 were due to domestic transmission.

The remaining 26 cases were imported — 13 from the United States, four from Japan, two each from India and Indonesia and one each from Myanmar, Kazakhstan, Hungary, Turkey and Canada.

Twenty patients died Tuesday, raising total deaths to 1,185, while 1,067 patients recovered, bringing total recoveries to 54,636. As of Tuesday at midnight, Korea had counted 70,212 coronavirus patients in all.

A cluster at the Seoul Dongbu Detention Center in Songpa District, southern Seoul, added 18 new cases Tuesday, all inmates, bringing the total number of infections there to 1,214.