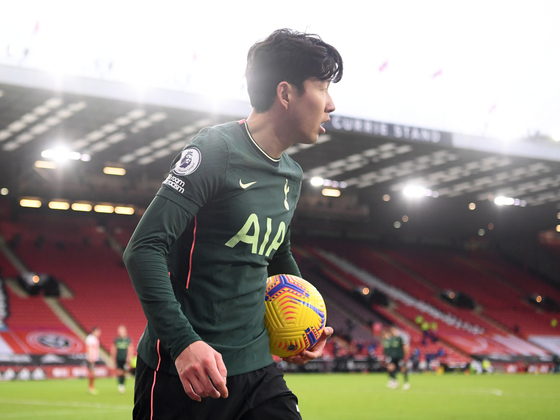 Son Heung-min of Tottenham Hotspur carries the ball during Spurs' match against Sheffield United at Bramall Lane in Sheffield on Jan. 17. With an assist during the game, Son has now been involved in 100 English Premier League goals throughout his career. [REUTERS/YONHAP]


Son Heung-min of Tottenham Hotspur became the first Asian footballer ever to be involved in 100 English Premier League (EPL) goals on Sunday, as he picked up an assist in Spurs' 3-1 win over Sheffield United.

Although Son was unable to find the back of the net at Bramall Lane in Sheffield, he picked up the 35th assist of his EPL career in the 5th minute when a well-placed corner found teammate Serge Aurier's head and ended up in the back of the net.

Spurs went on to win the game 3-1 with goals from Harry Kane in the 40th minute and Tanguy Ndombele in the 62nd. Sheffield United were able to get one back, with a goal from David McGoldrick in the 59th minute, but otherwise The Blades were kept quiet.

Despite a few chances throughout the game, Son was unable to do any damage of his own, although his hot streak lives on and Tottenham move to fifth in the EPL, one point behind Liverpool.

Son has now been involved in 100 goals throughout his career with Tottenham in the EPL, with 35 assists and 65 goals scored. He is the first Asian player in the EPL to reach the milestone. 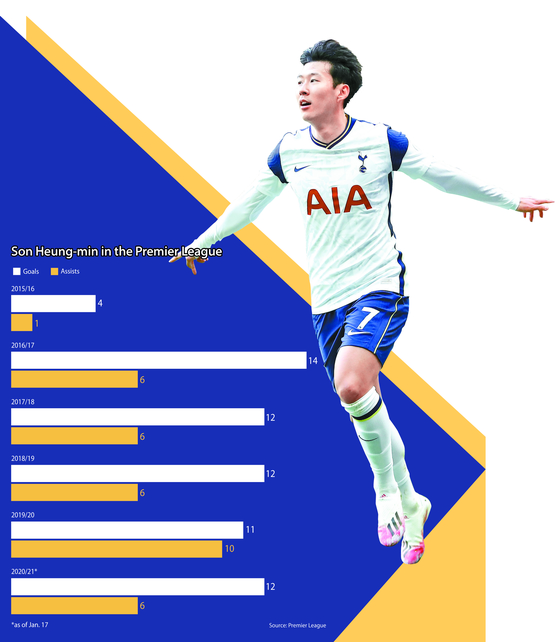 As well as being Spurs' fifth-highest goalscorer of all time, Son is one of only seven players in the club's history to have passed the 100 goal involvement mark. Harry Kane, who is Spurs' all-time top goalscorer with 155 league goals scored, is nearing 200 in terms of overall goal involvement, at 186.

The first few weeks of 2021 have seen Son smash through a number of career records.

First, Son scored his 100th goal for Spurs across all competitions on Jan. 2, against Leeds United.

That goal, scored with an assist from Kane, also allowed the duo to tie the record for the most prolific goalscoring partnership in a single EPL season ever, tying the record set by England football legend Alan Shearer and Chris Sutton, who together produced 13 goals for Blackburn Rovers in the 1994 to 1995 season.

Then, just a few days later on Jan. 5, Son scored his 150th career goal in Europe during a Carabao Cup game against Brentford F.C.

Son started his career in Europe in Germany by playing for Hamburger SV in the 2010-11 season. He moved to Bayer Leverkusen in the 2013-14 season, before moving to the Premier League as he joined Spurs in the 2015-16 season.

More records could still tumble this year. Son and Kane may have tied the record for the most prolific goalscoring partnership in a single EPL season, but just one more combination will allow them to set a whole new record.

The Son-Kane goal-making machine could go on to even greater things this season. The duo have now combined on 33 goals in total throughout their five years playing for Spurs together, making them the second-most prolific goalscoring partnership of all time.

With 33 goals, Son and Kane are now only four goals away from overtaking the all-time top goalscoring duo, Didier Drogba and Frank Lampard, who combined on 36 goals during their time playing for Chelsea.

On their route to the top, Son and Kane have already toppled some of the biggest names in EPL history.

Son has also been making headlines for the statistics he's been putting up this season.

With 12 goals across 18 EPL appearances, Son is averaging 0.67 goals per match, a huge improvement on his EPL career average 0.37 goals per match. Both Son and Kane are also tied for second in the EPL in terms of goals scored, with 12, behind Liverpool's Mohammad Salah with 13.

According to British newspaper the Independent and statistics from aggregator understat.com, Son has outperformed the number of goals he is statistically expected to score by 44.41 percent over the last five years, dramatically more than any other top goalscorer playing anywhere in Europe.

Son is followed on the list by Kane, Barcelona's Lionel Messi and Lazio's Siro Immobile, who all rate around 20 percent, meaning Son is defying statistical expectations more than double the amount of the next-closest superstars. That not only means that Son is one of the greatest goal scorers currently playing in Europe, but also means that he continues to defy expectations even after five years with Spurs.