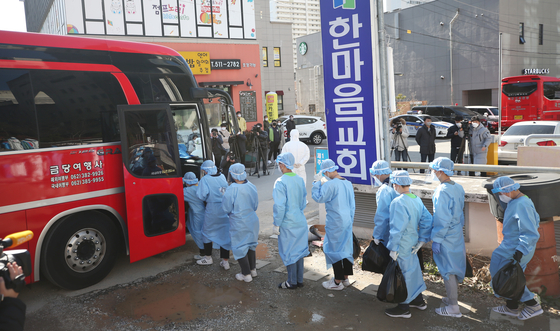 Students and faculty of the TCS International School in Gwangju who tested positive for Covid-19 are boarded onto a bus on Wednesday to be taken to a treatment center. The school is one of several unlicensed Christian missionary schools that have produced cluster infections this week due to poor observance of health regulations. [YONHAP]


Korean health authorities continue to grapple with more church-related Covid-19 clusters across the country, which threaten to undo recent successes in curbing the virus’s third wave in the country.

A total of 469 new infections were reported nationwide Thursday, a slight dip from the 497 on Wednesday, the Korea Disease Control and Prevention Agency (KDCA) said.

Of Thursday’s new infections, 445 were due to domestic transmission, while 24 were imported.

The country was relatively successful in taming the third wave since its onset in mid-November through extended social distancing rules. After daily infections reached a peak on Christmas Day, recording 1,240 cases, the count has been slowly dropping, reaching 349 on Tuesday.

But new cluster infections discovered at Christian missionary schools in Daejeon and Gwangju threaten to reverse the trend, adding hundreds of new cases this week.

In a Central Disaster Management Headquarters meeting Friday, Prime Minister Chung Sye-kyun said the clusters at the schools cannot be seen as temporary trends, but could turn into the onset of a major outbreak.

Both facilities are affiliated with International Mission (IM), a Korea-based missionary society that runs several church-related schools and facilities across the country. Neither are officially authorized education centers.

In addition to smaller clusters found at four other unauthorized IM schools, the clusters accounted for a total of 340 cases as of Wednesday, but authorities believe the actual number may be higher in light of the difficulties in tracing the infections.

Exactly how the virus spread inside the school is currently being investigated by epidemiologists, but health officials said they believe the disease was able to easily jump between students and teachers due to poor physical distancing within classrooms and dorm rooms.

Videos and photographs of activities uploaded to the school's websites suggest they did not abide by government mandated health regulations. Footage now taken off the Gwangju school’s website showed elementary school students praying, singing and dancing during worship services without any face masks.

IM affiliates issued an apology for the failure to respect health guidelines, but claimed the outbreaks were due to the difficulties of regulating dormitory life.

The school's efforts to delete evidence of health violations may also be an attempt to evade legal responsibility. Civic groups have filed criminal complaints against several facilities run by IM for operating unauthorized schools as if they were licensed educational institutions.

With daily cases creeping upward, authorities plan to announce adjusted social distancing guidelines over the weekend in an effort to clamp down on the contagion before the Lunar New Year holidays in mid-February.

“We quickly need to achieve stabilization [in the rise of daily cases] ahead of the Seollal [Lunar New Year] holidays and the beginning of vaccinations,” Chung said at a press conference Thursday.

“There was talk about dialing down social distancing rules, but we have reconsidered this in light of recent cluster outbreaks.”

As daily case numbers hover between 400 and 500, the situation remains at the government’s criteria for Level 2.5 rules, the second-highest of the country’s five-tier social distancing scheme.

The current ban on meetings of five people or more is likely to remain in place, as most experts supported extending the measures at a government-led health meeting on Wednesday.