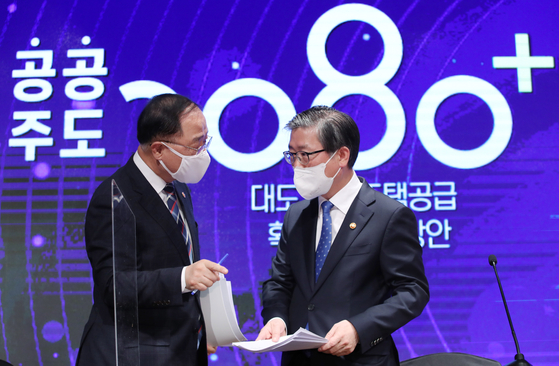 It's the biggest addition to the residential real estate market announced by the Moon Jae-in administration and its 25th set of measures attempting to curb apartment prices. It is the first set announced by new Land Minister Byun Chang-heum, who replaced Kim Hyun-mee on Jan. 8.

Details including the specific locations of the residences were not announced. The government said it was still negotiating with various parties including local governments.

Finance Minister Hong Nam-ki on Thursday characterized the latest plan as "shocking" in its number. He said 830,000 units is roughly twice the number of apartments that have been supplied annually.

Land Minister Byun said the 300,000 units in Seoul is triple the 100,000 housing units built in the new town development in Bundang, Gyeonggi in the late 1990s and matches the number of residences in the popular Gangnam, Seocho and Songpa districts in southern Seoul.

“Including the 1.27 million housing units that will be supplied through the third New Towns plan [announced in late 2018], total housing units will exceed 2 million, the largest increase by any administration,” Byun said.

The new land minister is taking a new approach to redevelopment projects and zone redevelopment, which the current administration has heavily restricted.

Byun said one of the goals of the latest set of measures is to increase supply of residences in areas where there is a high demand — hinting at the greater Seoul area.

According to the Land Ministry, 136,000 units will be supplied through reconstruction and zone redevelopment and 68 percent, or 93,000 units, will be in Seoul.

The government said it will ease regulations and provide incentives.

The minister promised the fast-track procedure would cut red tape and either the state-owned Land and Housing Corporation or Seoul city government-owned Seoul Housing and Communities Corporation will take charge of redevelopment projects.

Under the current system, zone redevelopment needs the consent of 75 percent of property owners. However, the government is relaxing that regulation to approve the project when 66 percent of landowners agree.

Several new incentives will be offered to property owners, including easing regulations on floor-area ratio for redevelopment, which will allow a greater number of apartments to be built, as well as exempting taxes on profits generated from redevelopment and an easing of other regulations.

The government is raising the floor-area ratio to 700 percent, up from a maximum of 500 percent announced last August.

“[Through the changes], property owners will be guaranteed a profit that is 10 to 30 percentage points higher,” Byun said.

The government estimated that the fast track will reduce the time it takes for major reconstruction and zone redevelopments from 13 years to five.

Byun said 70 to 80 percent of the new residential units will be presold before construction.

Instead of giving preference to people in special circumstances — including low-income families, newlyweds and young people — 50 percent of the new housing units will be open to anyone.

But people who don't currently own apartments will be given priority.


However, the government said it will remain vigilant against real estate speculators.

“We will continue to monitor housing prices in designated areas,” Byun said.

“Until now the government has been working hard to stabilize the real estate market by restricting speculative investment through taxation and loan [restrictions] while expanding housing supplies, including creating the three new towns, finding new land in the greater Seoul area and the jeonse [lump-sum deposit] measures,” Finance Minister Hong said. “Yet despite our policy efforts, because of numerous factors including market anxiety over [housing] supply, [increased] liquidity and population changes, the real estate market failed to stabilize.”

“Supplying 320,000 units in Seoul is a good plan,” Kwon said. “In the last three years and a half [under the current administration] housing prices have doubled."

According to the Korea Real Estate Board, apartment prices in Seoul saw a sharp rise last month.

When compared to the previous month, apartment prices in Seoul rose 0.4 percent, the sharpest spike since last August's 0.42 percent.

Jeonse prices also rose, although not as fast as in December.

Jeonse prices in January rose 0.51 percent compared to the previous month, while in December they rose 0.63 percent.

“The reason prices are continuing to rise is largely because of a shortage of supply and huge demand,” said Myongji University Prof. Kwon.

Full of twists and turns

Moon says developing greenbelt areas is off the table