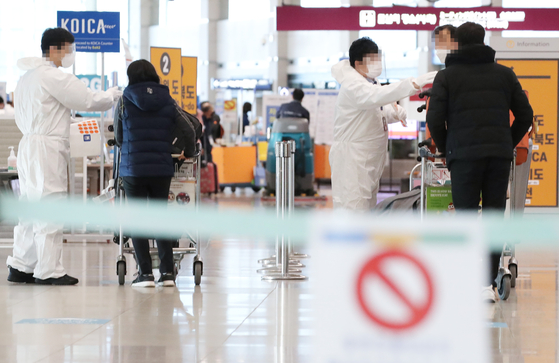 Health officials place stickers on travelers from abroad at the Incheon International Airport Terminal 1 Thursday afternoon amid concerns over the spread of coronavirus variants from overseas. [YONHAP]


Domestic transmissions of overseas coronavirus variants could lead to a fourth wave of infections in the springtime, health authorities warned Thursday, as Korea’s daily Covid-19 cases remained over 400 for a second consecutive day.

The Central Disaster Management Headquarters said that there are concerns that these overseas variants, considered to be more easily transmissible, could lead to another spike in infections in March or April.

The Korea Disease Control and Prevention Agency (KDCA) reported the previous day five new variant cases — four of the British variant, the first cluster of variants confirmed to have been transmitted domestically, and one of the new South African variant. A total of 39 cases of coronavirus variants from Britain, South Africa and Brazil were confirmed in Korea as of Wednesday.

Addressing the potential for a spread of the variants, Yoon Tae-ho, a senior Health Ministry official, said in a briefing, “Health authorities and experts are not ruling out such a possibility and must be prepared. Social distancing and early epidemiological tracing is nearly the only way to block the spread from early on, along with procuring enough hospital beds.”

A Syrian visitor who arrived from the United Arab Emirate (UAE) on Dec. 25 and initially tested negative for Covid-19 was confirmed positive on Jan. 7 with the British variant ahead of release from a two-week self-isolation period.

This patient self-isolated in the second floor of a residence in South Gyeongsang with four family members who stayed on the first floor, who later were also found to have been infected.

This patient from the UAE has been linked with infecting 37 other people, including the four family members, relatives and their friends in other cities.

Four relatives — one from Gimhae and two from Yangsan in South Gyeongsang and one from Naju in South Jeolla — were confirmed Wednesday by the KDCA to have contracted the British variant. A relative that visited the four family members at their house is believed to have spread it to other relatives across regions.

Health officials say it is likely that the other people have also been infected with the British variant and that the strain can already be spreading locally.

Health authorities have tested some 180 contacts but have not found any additional cases so far.

The latest South African variant case from Gumi in North Gyeongsang was also transmitted through a family member.

The government is reviewing more stringent entry procedures for visitors from abroad amid the global concern of rising variant cases.

Like over the Chuseok holiday last fall, the government will be implementing measures over the Lunar New Year holiday next week to discourage travel, including banning indoor seating at expressway rest stops.

Korea reported 451 new Covid-19 cases as of Wednesday midnight, of which 429 were local infections, according to the KDCA. This brings total cases to 79,762.

There were seven additional fatalities, bringing the total death toll to 1,448.

Of 22 imported cases, 11 came from the United States and three from Europe. 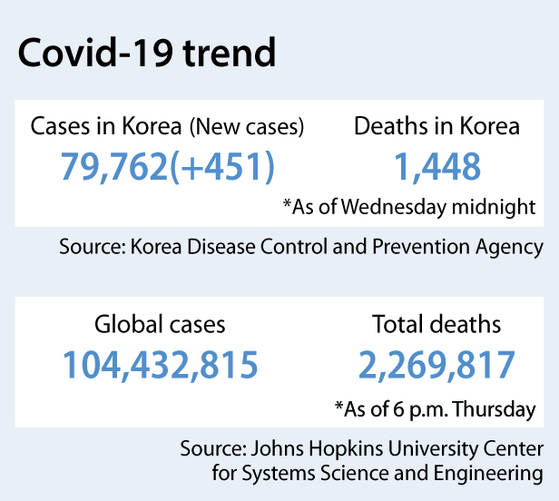 Local transmissions remained high in the metropolitan area, with 166 cases were reported in Seoul, 128 cases in Gyeonggi and 43 in Incheon. Outside the greater Seoul area, there were 26 cases in Busan, 13 in South Chungcheong, 12 in Gwangju and eight in Gangwon.

A restaurant in Gwangjin District, eastern Seoul, which violated social distancing regulations added eight new cases, bringing total related cases to 51 as of Thursday after the first patient was confirmed on Jan. 29. This restaurant had operated as a "hunting pocha," or a business that caters to patrons looking for random hookups, referred to as “hunting,” with visitors dancing close together and table hopping without masks.

The KDCA Thursday said 55 of 17,890 people tested had developed antibodies against the coronavirus in Korea. The antibody rate of 0.31 percent in Korea is low compared to other countries.