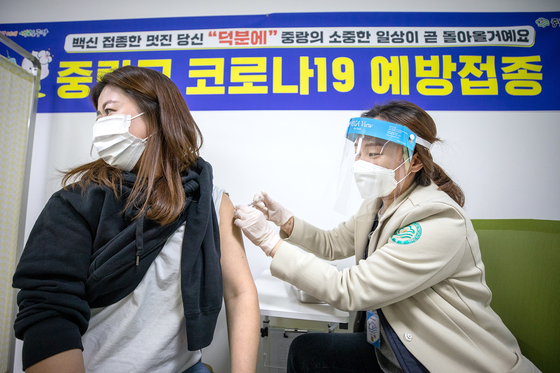 A health care worker at a health care center in Jungnang District, northern Seoul, receives an AstraZeneca shot Thursday. The government approved of the use of AstraZeneca vaccines in people 65 and older that day. [NEWS1]


The Korean government Thursday approved the use of AstraZeneca's Covid-19 vaccine for people aged 65 and older starting this month following new studies addressing public concerns over the shot’s efficacy in the elderly.

The Korea Disease Control and Prevention Agency (KDCA) announced the AstraZeneca vaccine will be administered to people 65 and older at nursing homes and other high-risk facilities from later this month, citing recent studies in England and Scotland revealing its effectiveness in preventing severe illness and lowering hospitalizations among the elderly.

There have been concerns surrounding the vaccine, developed by the British-Swedish pharmaceutical company AstraZeneca and Oxford University, for being less effective in people aged 65 and over and showing poor initial results in fighting off the South African coronavirus variant.

The KDCA last month initially excluded the use of AstraZeneca's vaccines for the elderly group for the time being, stating that its use in that age group will be postponed until additional clinical data on its effectiveness in the elderly is available.

An independent panel of experts reviewed Wednesday the results of new studies in Britain and Scotland which recommended the use of the AstraZeneca vaccine in the elderly.

A study from Britain found that both the AstraZeneca and Pfizer vaccines are more than 70 percent effective in preventing Covid-19 infections and hospitalizations in people over 70, said the KDCA.

Another study from Scotland showed that four weeks after the first dose, hospital admissions were reduced by 85 percent for the Pfizer vaccine and 94 percent for the AstraZeneca shots.

Based on the review, the KDCA said it will now allow the use of AstraZeneca vaccines on all adults 18 and over, starting with some 376,000 patients and health care workers at nursing homes and other high-risk facilities previously precluded from inoculations.

The KDCA also decided to extend the interval between the first and second doses for AstraZeneca vaccines from the current eight weeks to up to 12 weeks, which falls within experts’ recommendations. This comes as heath authorities approved using reserved second doses to inoculate more people with their first shots.

Following the recent studies, a number of European countries have also been authorizing the use of the AstraZeneca vaccine in those 65 and older after initially holding back.

Prime Minister Chung Sye-kyun said in a Covid-19 meeting that 7 million more doses of the AstraZeneca vaccine, enough for 3.5 million people, are expected to be delivered from the last week of May to June.

Chung urged speeding along the Covid-19 inoculations, noting the inclusion of the elderly in the AstraZeneca vaccinations, and said, “Recently, data sufficiently proving the efficacy of the vaccine for the elderly have been released in Britain, and based on this several countries such as Germany and Italy have already expanded the targets of vaccination to the elderly.”

Some 20,000 flight attendants will also be included in those eligible to receive shots in the second round of vaccinations, which prioritizes giving shots to seniors and medical professionals.


Over half a million people have been inoculated, or nearly 1 percent of Korea's population, in just under two weeks since the country's vaccination program launched on Feb. 26.

As of Wednesday midnight, 500,635 people were administered their first shots, or 0.96 percent of the country's population of 52 million, said the KDCA.

However, daily coronavirus cases remained in the 400s for a third consecutive day as the country struggles to bring down infections with increased mobility due to spring weather and the start of a new school semester. 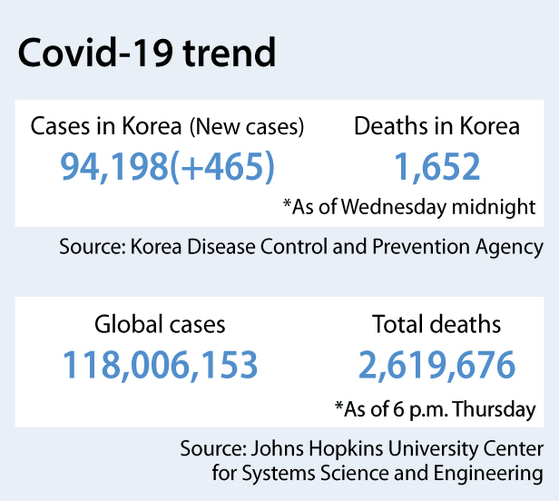 The KDCA said there were 21 new imported cases.

Of the local transmissions, 137 were reported in Seoul, 178 in Gyeonggi and 18 in Incheon, with infections at nursing homes, child care facilities, offices and friend and family meetings in the metropolitan area.