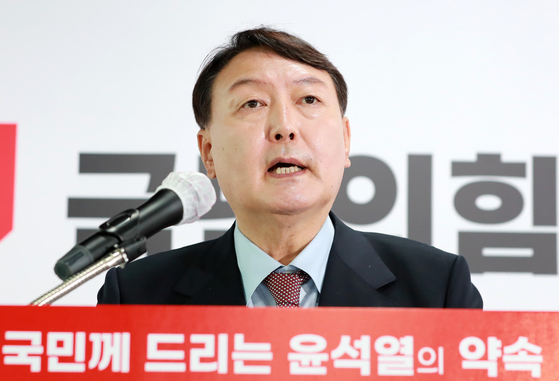 
Opposition presidential candidate Yoon Seok-youl faced a series of raids during the Chuseok holidays from three state investigative agencies over allegations that he abused his position as prosecutor general to direct targeted probes.


The Corruption Investigation Office for High-ranking Officials (CIO) announced a probe into Yoon on Sept. 10 on four different charges, including abuse of power and interference in the exercise of a right, divulgence of classified information while on public duty and violations of the Personal Information Protection Act and the Public Official Election Act.

At the heart of the charges is the suspicion, raised repeatedly by the ruling Democratic Party (DP) and members of the administration of President Moon Jae-in, that Yoon tried to meddle in politics while he was the chief prosecutor by encouraging the main opposition People Power Party (PPP) to file criminal complaints against prominent government and ruling party figures ahead of the parliamentary elections in April last year to possibly influence the polls.

The CIO is not alone on pursuing the trail of allegations against Yoon.

The whistleblower who alleged political meddling by Yoon was reportedly present during the raid into the audit bureau of the Supreme Prosecutors' Office.

The prosecutors from the Seoul central district office are expected to summon key witnesses as soon as documents collected during the raid have been reviewed.

While the Supreme Prosecutors' Office said it plans to continue its ongoing fact-finding mission, legal observers said that the mission has turned into an investigation in all but name as a dedicated investigation team has stepped up.

The CIO is reported to be in the process of analyzing materials confiscated during its own raid on the state prosecution service that are related to probes which occurred during Yoon's tenure.

Adding to Yoon's troubles, police also have plans to investigate the accusations against him.

As such, Yoon faces an unprecedented situation in which the state prosecution service, the CIO and police are all investigating his case.
Legal experts raised concerns that the overlapping investigations could lead to inefficiency and violations of Yoon's civil rights as he could be subjected to multiple raids and repeated summons by different government agencies.

He said that "there is no need to worry" about the involvement of three investigative agencies as the institutions "are emphasizing cooperation."

Legal experts predict that most of the responsibility for the case will be transferred to the CIO in the future.

Bad day for the law