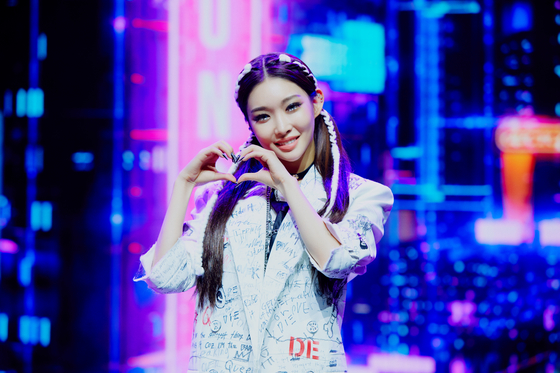 Chungha holds an online showcase for her first full-length album “Querencia,” which dropped on Monday at 6 p.m. Chungha performed and revealed the music video for her new lead track “Bicycle.” “Querencia” is Chungha’s first album in 20 months. [MNH ENTERTAINMENT]


Chungha found solace through music while recovering from the coronavirus earlier this year, and she hopes that her first full-length album will be the same consolation to listeners as well, the singer said on Monday at an online showcase held for her new album "Querencia."

Chungha started the showcase with a performance of “X,” a song from her upcoming album, which dropped at 6 p.m. She then sat down to talk with the MC about her new album and also her recovery from Covid-19, for which she asymptomatically tested positive in Dec. last year.

“While I was in quarantine, I realized I had so many things to be thankful for but hadn’t noticed them. Making ‘Querencia’ helped me realize my blessings,” Chungha said.

“Querencia” is a Spanish word which roughly translates to “a certain place where one feels strong and safe.”

“Querencia” was originally set to drop on Jan. 4 but was delayed after Chungha tested positive for Covid-19. The album comes as her first full-length work and features a whopping 21 tracks under four themes: noble, savage, unknown, and pleasures.

“While many opportunities to perform and meet fans disappeared due to Covid-19, working on ‘Querencia’ was my place to find peace,” said the singer. “I want ‘Querencia’ to be a haven for others as well.”

She then revealed the music video and live performance of her new lead track “Bicycle,” which she described as “a confident and aggressive song, saying that I will go my way without fear,” the singer said. Chungha participated in writing the lyrics for tracks “Bicycle” and another track “Byulharang,” which is dedicated to her fan club of the same name.

“I’m still not used to songwriting, but that’s what made the process fun,” said Chungha. “I cried while writing the lyrics for ‘Byulharang.’ I get emotional whenever I think of my fans.”

“I put my blood, sweat and tears into this album,” said the singer. “I hope my new tracks help people forget about these frustrating times, even just for three minutes.”