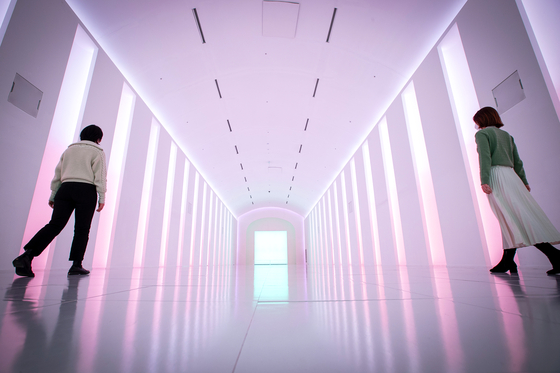 The hallway at Paradise Hotel and Resort in Incheon where singers Park Jin-young and Rain filmed scenes for their music video ″Switch to Me.″ [JANG JIN-YOUNG]


Newtro, a portmanteau of the words new and retro, is the trend at the forefront of the K-pop scene these days with both music and music videos taking inspiration from tracks that first gained popularity in the 1990s.

The music video for recently released “Switch to Me” by so-called JYB, a collaboration between singers Park Jin-young, often known as JYP, and Rain, whose name in Korean is pronounced as B, looks as though it has taken inspiration from Park's previous videos made in his heyday in the 90s.

The video, which follows two men fighting over a woman, was viewed more than seven million times on YouTube in the first four weeks since its release. Many left comments that they find it interesting to see a video that reminds them a lot of days gone by, but that doesn’t look tacky or outdated.

TVXQ member U-Know Yunho’s music video for his track “Thank You” also takes inspiration from the past, in particular from Hong Kong noir films of the 1980s and 90s.

A music video of Universe Hipster, a new duo of Kim Hee-chul from the boy band Super Junior and Min Kyung-hoon from the rock band Buzz, for their song "Hanryang," goes back as far as the Joseon period (1392-1910). "Hanryang" refers to playboys in Joseon. The song presents a version of hip hop harmonized with gukak, or Korean traditional music.

As more and more fans are curious about where such newtro music videos were filmed and even want to head to those spots to film their own take on the originals, the JoongAng Ilbo checked them out.


A five-star hotel becomes a stage
The locations where Rain and Park Jin-young dance in the music video of “Switch to Me” are all in the Western port city of Incheon. The two singers dance in group with other dancers on the rooftop of a shopping mall in Songdo, Incheon with the backdrop of city lights at night. Their driving scenes were filmed on Conventia Daero in Songdo. For Rain, Incheon isn’t so new as he had filmed his music video to “Gang” in Wolmido wharf in the city. 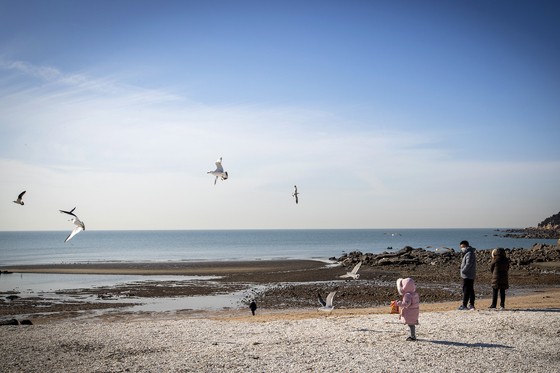 Incheon's Seonnyeo Rock Beach, which can be translated as fairy rock beach, is where singers Park Jin-young and Rain filmed scenes for their music video ″Switch to Me.″ [JANG JIN-YOUNG]


The scene in which Park appears while riding a white horse was filmed in Seonnyeo Rock Beach, which can be translated to Fairy Rock Beach, on Yeongjong Island . The beach is not too far away from the popular Eulwang-ri Beach. Seonnyeo Rock Beach is relatively smaller, but it has more room to relax away from the crowds. At the end of the beach is a large rock shaped like a standing fairy.

The famous kiss scene of the two main characters in the hit romantic comedy drama “Boys over Flowers” in 2009 was also filmed here.

The other scenes from the “Switch to Me” music video were filmed at Paradise Hotel & Resort on Yeongjong Island in Incheon. The white space where the two singers dance like rabbits is called Paradise Walk, which connects the hotel’s lobby to a more open square.

Here, the color of the lights change to create a dream-like ambience. creating a hot spot for Instagrammers. 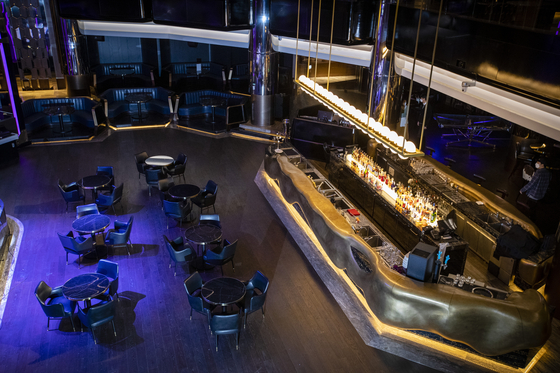 A club at Paradise Hotel and Resort in Incheon where singers Park Jin-young and Rain filmed scenes for their music video ″Switch to Me.″ [JANG JIN-YOUNG]


Other hotel facilities that appear in the music video include the live music bar Rubik, pool party space Chroma Beach Club, and restaurant Serase. The scene in which singer Psy, famous for the worldwide hit "Gangnam Style" (2012), makes a surprise appearance was filmed in front of the hotel’s lobby.

A rap battle at a hanok
The music video for “Hanryang” by Universe Hipster, starts with a shout “Come out here,” a phrase that was commonly used during the Joseon era, when a nobleman visited another nobleman's house and summoned a gatekeeper or a servant to guide him inside. 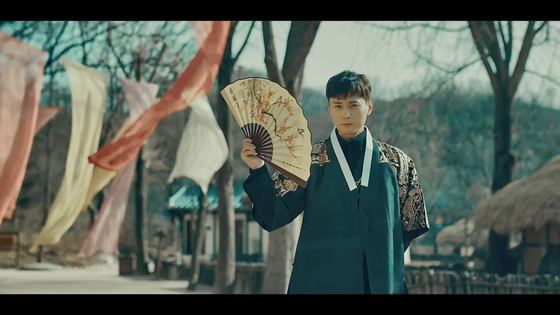 A scene from the music video for ″Hanryang,″ sung by Universe Hipster. It is a duo of Super Junior's Kim Hee-chul and Buzz's Min Kyung-hoon. [JTBC]


The music video was filmed at the Korean Folk Village in Yongin, Gyeonggi. If some fans want to imitate scenes from the music video, they can rent hanbok, or traditional Korean dress, from an office near the main gate of the village.

The folk village has many different style of hanok, or traditional Korean building, which were moved here from various parts of the peninsula. The very first scene of Kim Hee-chul wearing hanbok starting to rap was filmed at a local government office building where civil servants of Joseon worked.

The colorful silk fabrics hanging from trees in the scene in which Min Kyung-hoon starts his solo are not objects specially prepared for video shoot. The fabric is a the permanent decoration of a folk village street named Silk Fabric Street.

Singer Bibi and boy group Ateez also appear in the music video showing their musical talents. Their scenes were filmed at a building once owned by an aristocratic family. The buildings were also featured in the popular film “The Face Reader” (2013).

What’s outdated is what’s cool
The music video to U-Know Yunho’s song “Thank You” has an impressive beginning. Gangsters led by a boss played by actor Hwang Jung-min have a knife fight with U-Know Yunho in a dark alley. 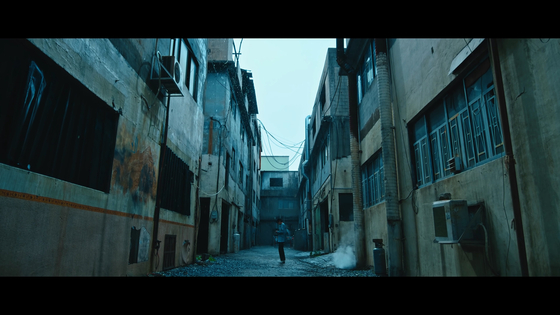 A scene from U-Know Yunho's music video "Thank You" is filmed in old industrial complex in Namyangju, Gyeonggi. [SM ENTERTAINMENT]


The scene may remind viewers of Hong Kong noir films that prospered in the 1980s, or Korean gang movies that reached their peak in the early 2000s.

The alley is neither computer graphic nor a set made for filming. It is an industrial complex in Namyangju, Gyeonggi. About 100 factories were built in 1980s and 90s in the complex. Now, many of them are no longer operated and abandoned.

The rusted industrial complexes and shabby alleyways make good landscapes for shooting scenes in criminal or thriller films that are set in the slums and other dark parts of a city.

Some action scenes of the cable channel OCN’s hit drama “The Uncanny Encounter” and tvN’s hit drama “Crash Landing on You” were filmed in the industrial complex and neighboring alleys. It is also known among photographers who look for unique spots.