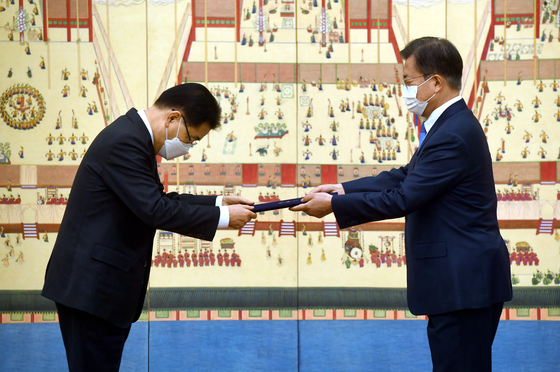 
Resolving South Korea’s relations with Japan to strengthen the Korea-U.S. alliance is emerging as the key variable in reviving the Moon Jae-in administration’s Korean Peninsula peace process initiative, according to diplomatic sources Thursday.

Moon made the remarks as he presented Chung with his certificate of appointment, according to the Blue House, noting that “close communication and cooperation with the new Joe Biden administration is the only way for this to be possible,” while advising not to “rush” North Korea to denuclearize and establishing peace on the peninsula.

However, Washington has been pushing for the improvement of Seoul-Tokyo relations as a means of strengthening the Korea-U.S. alliance and trilateral cooperation in the region.

A Korean diplomatic source told the JoongAng Ilbo Thursday, “There is no difference in views with the Joe Biden administration on strengthening the Korea-U.S. alliance, but, before that, the prevailing notion is that Korea and Japan need to mend their relations first. The strife between Korea and Japan is a great impediment to the Korea-U.S.-Japan security cooperation, a key mechanism to respond to China.”

As concerns about China became prioritized by the United States, Washington put weight on not only its bilateral alliances with Seoul and Tokyo but also their trilateral cooperation.

The problem is the unfavorable factors between the two countries that have accumulated since the onset of the Moon administration four years ago.


Japan retaliated against historical disputes with export restrictions on Korea since 2019, going against the principle of separation of political and economic affairs. In turn, Korea, rather than managing the situation, encouraged anti-Japanese sentiment domestically, and bilateral relations continued to deteriorate.

The Korean government has taken a hard-line stance to pressure Japan over historical issues stemming from its 1910-45 colonial rule over the peninsula, so it is not easy to take the first step toward improving relations.

Seoul and Tokyo struck a deal under the former Park Geun-hye and Shinzo Abe administrations attempting to resolve the so-called comfort women issue in December 2015 "finally and irreversibly,” which included an apology by the Japanese government and a 1-billion-yen ($9.4 million) fund for the victims of Japan’s wartime sexual slavery.

The Moon administration said in early 2018 that while the deal was flawed, it wouldn’t request a renegotiation as it was an official agreement between the two countries. However, then Korean Foreign Minister Kang Kyung-wha in January 2018 underscored that the agreement is “not a true resolution” to the issue of Japan’s wartime sexual slavery. Korea went on in 2019 to dissolve the Tokyo-funded foundation meant to support the comfort women victims, effectively gutting the 2015 deal.

Reflecting a recent change of tone, the Korean Foreign Ministry acknowledged the comfort women deal was “officially agreed upon by the two countries” after a local court ruling ordered the Japanese government to compensate the victims last month.

The Seoul Central District Court ruled on Jan. 8 that the Japanese government must pay 100 million won ($90,400) to each of the 12 women who were forced into sexual slavery by the Imperial Japanese Army during World War II. The court rejected Tokyo’s claims of state immunity, saying Japan had committed systemic crimes against humanity in violation of international standards and norms.

President Moon Jae-in in a New Year’s press conference on Jan. 18 acknowledged that the comfort women ruling was "truthfully a bit perplexing” amid tensions with Tokyo, stressing the need for “future-oriented” relations with Japan.

Despite such overtures, there is still a strong sense of doubt in Japan.

While the 2015 comfort women deal was not a treaty, it was an internationally acknowledged promise announced in a press conference made by the Korean and Japan foreign ministers and welcomed by the United States. The Moon administration however launched a public-private task force to verify the 2015 deal, which had been criticized by some comfort women survivors and civic groups as not properly acknowledging Japan’s legal responsibility.

Park Cheol-hee, a dean and professor of Japanese politics at the Seoul National University Graduate School of International Studies (GSIS), said, “The Korean government must take the first step to alleviate the distrust [in Japan] that agreements between the two governments can be overturned so easily. The Korean government needs to reveal that it is willing to resolve the compensation issue even in the judicial and civilian sectors.”

The Moon administration stressed that the biggest flaw of the 2015 comfort women agreement was that it violated the principle of a victim-centered solution, not properly reflecting the opinions of the sex-slave survivors.

President Moon said on Aug. 14 last year, to mark the International Memorial Day for Comfort Women, “An important principle for resolving the problem is being victim-centered, and the government will seek a solution until the victims say it is okay.”

However, this could also limit the Korean government's working room for diplomacy with Japan.

Sohn Yul, president of the East Asia Institute, said, “The Korean government should realize the principle of a victim-centered solution through actively listening to the voices of the victims and mediation, but at the same time it is necessary to try to explain a more macro perspective to the victims, such as national interest and diplomatic environment.”

Seoul and Tokyo’s relations soured in July 2019 after Japan implemented export restrictions on Korea and removed it from its "white list" of trusted trading partners, leading to a tit-for-tat diplomacy. Tokyo’s export restrictions are seen as retaliation against the Korean Supreme Court’s rulings in 2018 ordering Japanese companies to compensate Korean victims of wartime forced labor.

Washington only intervened after Seoul announced its decision to terminate its General Security of Military Information Agreement (Gsomia), a bilateral intelligence-sharing pact with Japan, in retaliation to Tokyo’s export restrictions against Seoul. Korea eventually decided to conditionally keep Gsomia in November 2019.

However, the Biden administration is stressing the importance of partnering with allies in its foreign policy approach. The U.S. State Department has focused on highlighting the importance of relations with allies Korea and Japan, as well as a three-way cooperation, a message conveyed by U.S. Secretary of State Antony Blinken to Chung in their first phone call last week.

Korea now also has the task of fending against Japanese efforts to pass Korea off as a country that breaks its promises.

Some analysts point out that that Washington’s willingness to arbitrate can serve as an opportunity to improve relations between Korea and Japan.

Yang Kee-ho, a professor of Japanese studies at Sungkonghoe University, said, “There is no driving force as strong as the active mediation of the United States to improve relations between the two countries. As a result, there is an atmosphere of preparing for dialogue, and the Korean government needs to show a forward-looking attitude, such as proposing a step forward on historical issues.”