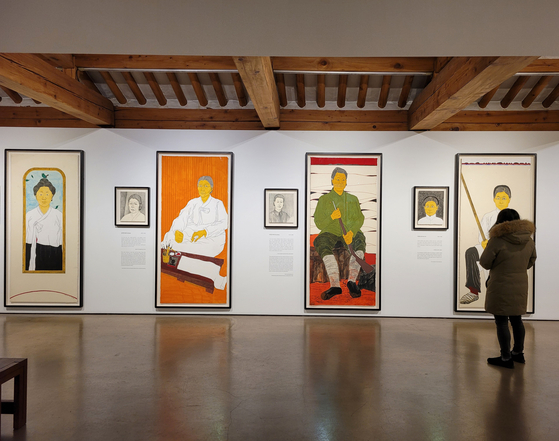 
Yun Suknam, 82, dubbed the “Godmother of Korean Feminist Art,” got angry when she couldn't find any portraits of women in a voluminous book about Korean traditional portraits. “So, I decided to paint portraits of women... the women who fought for the country,” the artist told the Korea JoongAng Daily on Thursday at Hakgojae Gallery, which is now showcasing 14 pieces of her latest chaesaekhwa, or Korean traditional color paintings, that depict female activists who fought for Korea’s independence from Japan's colonial rule (1910-1945).

Yun started painting around the age of 40, widened the horizon of her art during her study in New York before finally gaining international fame with her unique works that are a combination of wooden sculptures and paintings and depict mainly her own mother, female figures forgotten in history and abandoned dogs. In recent years, she learned chaesaekhwa techniques in order to create portrait paintings in Korean traditional style, after she was fascinated by the self-portrait of the scholar-painter Yun Du-seo (1668-1715), famous for its piercing gaze and considered to be one of the greatest portrait paintings from the Joseon period (1392-1910).

However, the book she bought for reference made her angry, reminding her that Joseon was such a patriarchal, feudal society of distorted Confucianism where portraits were exclusively for male aristocrats with positions in the government. She decided to create portraits of women with chaesaekhwa techniques. But why did she choose to paint national independence activists rather than women’s right activists?

“I know that patriotism is old-fashioned and it could fall into just a kind of egoism in a larger scale,” Yun said, smiling. “However, I’m old, so I have old-fashioned patriotism. Nationality is related with a person’s identity. I think the women’s activities for Korea’s independence were their struggles to find themselves in such a hard time.”

In line with her remark, Chung Chil-sung (1897-?), is among the women featured in Yun’s paintings. Chung was an activist not only for Korea’s independence but also for women’s economic independence. She actively provided lectures and job training programs for women. She chose to live in North Korea in 1948 and nothing about her life after 1958 is known. 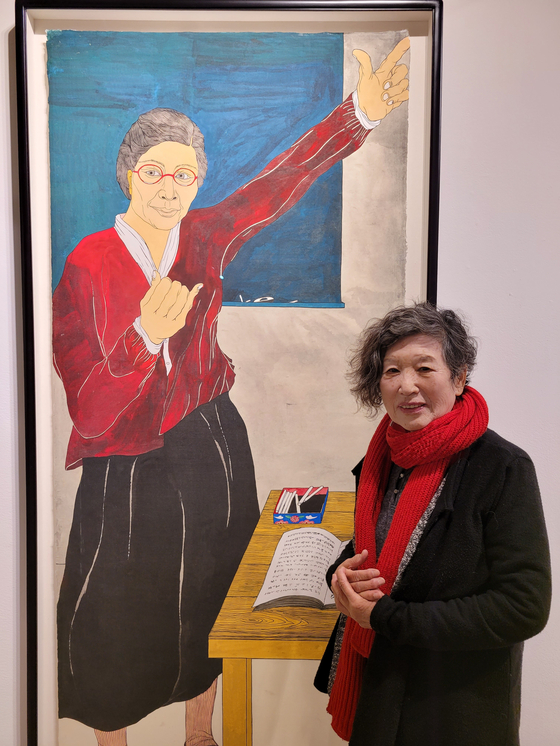 
Yun launched a project of painting portraits of 100 female activists during the Japanese colonial period, who have been less known compared to male activists. The 14 paintings are the first fruit of the project.

According to Hakgojae Gallery, Yun has been collaborating with novelist Kim E Kyung for several months in selecting the historical women for the project. Kim has been dramatizing these women’s stories, based on the records and literature extant and Yun has been painting them in traditional chaesaekhwa techniques, while alluding to the writing of the novelist through painting symbolic objects or backdrops. The writing was published simultaneously with the opening of the exhibition.

Yun said she has always regarded “the face, and especially the eyes as the key to revealing a person’s inner spirit most candidly.” Accordingly, she made several small pencil drawings of the women’s faces based on their photos, focusing on their eyes, to get a sense of their characters. She then moved to the actual drawing, which she would then transfer to hanji, or Korean traditional mulberry paper, and complete with chaesaekhwa.

In the exhibition, the viewer can see the entire process of her work, as the very first drawing of the face is shown alongside the initial small and the final large portraits.

The exhibition runs through April 3. Admission is free.