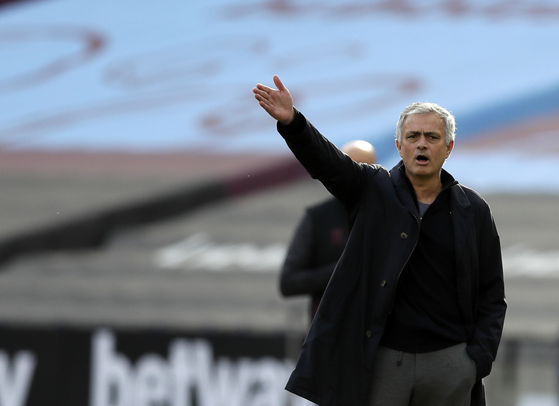 
Tottenham Hotspur manager Jose Mourinho defended his team after it picked up another loss on Sunday night, saying it has "problems I can't resolve myself," but isn't in crisis.


Spurs lost 2-1 to West Ham on Sunday, the club's fifth loss in its last six English Premier League games. Spurs went down 1-0 in the first half with a goal from West Ham's Michail Antonio, conceding another by Jesse Lingard at the start of the second half before Lucas Moura managed to pull one back.

Speaking after the match, Mourinho defended the team but admitted there were issues.

"I wouldn't say crisis," Mourinho was quoted as saying on BBC Sport. "I would say a bad, a really bad, run of results. That is obvious. We're losing too many matches."

Mourinho, who had just managed his 50th Premier League match with Spurs, defended his management style when asked if he was the cause of the problems.

""No, not at all. Mine and my coaching staff's methods are second to nobody in the world. I think for a long, long time, we have [had] problems in the team that I cannot resolve by myself as a coach."

"The mood went a little bit down when we had a couple of bad results but I think the changing room has not changed about these kind of things," Son said. "Everyone is happy, everyone is having a laugh. Everyone is focused in every single game so what should I say? It is a bad rumor."


Spurs' recent run of bad results has led some British football pundits to question whether Son and captain Harry Kane are likely to stick with the team if it continues to struggle.