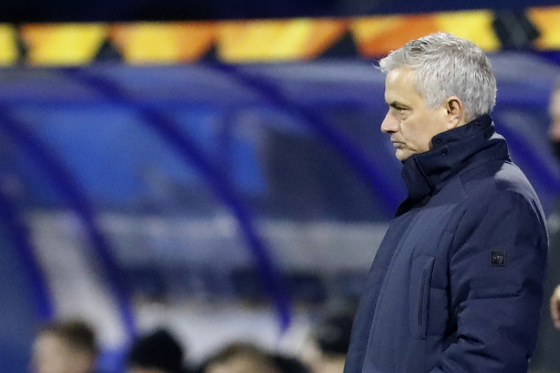 
Tottenham Hotspur crashed out of the Europa League with a humiliating 3-0 loss in Zagreb, Croatia, in a game that was supposed to be nothing more than a formality ensuring their spot in the quarterfinals.

Spurs threw away a 2-0 lead on aggregate at Stadion Maksimir in Zagreb on Thursday, allowing Dinamo Zagreb's Mislav Orsic to score a hat trick with goals in the 62nd, 82nd and 106th minutes. When the dust settled on Spurs' lackluster display the score across both legs stood at 3-2 with Dinamo continuing on to the quarterfinals and Tottenham flying back to London with a lot of questions to answer.

Playing without Son Heung-min, who is still out with a hamstring injury, Spurs manager Jose Mourinho chose to push captain Harry Kane out in front on his own with attacking midfield support from Lucas Moura, Dele Alli and Erik Lamela.

Presumably expecting an easy game, Mourinho kept Gareth Bale, probably the most logical choice to strengthen the offensive lineup in Son's absence, on the bench until the 60th minute, bringing the Welsh forward onto the pitch just in time to watch Orsic start raining in goals.

Dinamo entered the game as obvious underdogs and played with a flair that showed they knew they had nothing to lose. Spurs, on the other hand, looked like a team that thought they had already won and were only interested in phoning in a token attempt.

Mourinho rallied against his own team after the game, criticizing their attitude and approach to the entire game.

“I’m disappointed with the difference of attitude between one team and the other,” Mourinho said after the game. “I feel sorry that my team — I belong to that team — is the team that didn’t bring to the game not just the basics of football but, I believe, the basics of life, which is to respect our jobs and to give everything.

“I don’t need external critics because I feel deeply hurt with what happened with my team. I don’t want to say much more than that. On behalf of my team, in spite of some of them maybe not sharing my feelings and emotions, I can only apologize to the Tottenham supporters.”

Mourinho congratulated the Dinamo players after the match, while simultaneously turning on his own players for their lack of professionalism.


Son was out for the game after appearing to suffer a hamstring injury during Spurs' North London derby against Arsenal on Sunday, pulling up while on the run in the 18th minute holding his leg. Tottenham quickly sent their medical team onto the pitch and after a brief attempt to walk it off, Son was taken off and headed straight down the tunnel.

Reports on Tuesday suggested that Son is making a quick recovery and could be back in the squad for the team's game against Newcastle United on April 4, or possibly even for the game against Aston Villa on March 21, although the club hasn't officially discussed his recovery.

With Spurs falling to pieces against Dinamo on Thursday, Son's return to the club can't come soon enough.