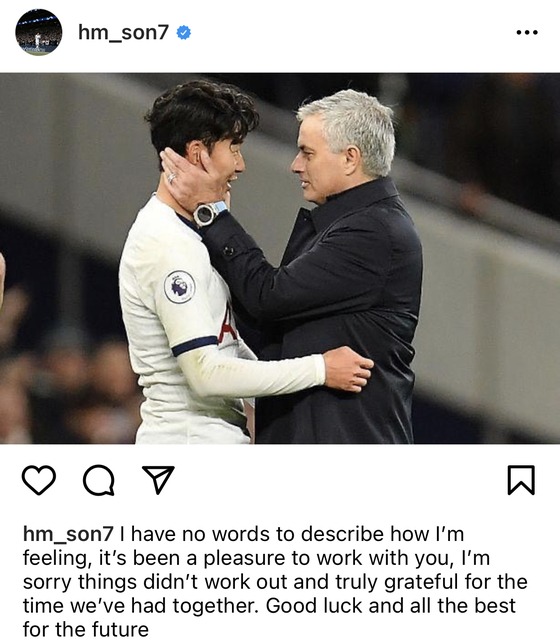 
Tottenham Hotspur forward Son Heung-min has paid tribute to former manager Jose Mourinho, who was fired by the club on Monday.

"I have no words to describe how I’m feeling," Son said in a post on his personal Instagram account, "it’s been a pleasure to work with you, I’m sorry things didn’t work out and truly grateful for the time we’ve had together. Good luck and all the best for the future."

Tottenham announced on Monday morning that Mourinho and his coaching staff Joao Sacramento, Nuno Santos, Carlos Lalin and Giovanni Cerra had been "relieved of their duties."

The club thanked him for his contribution, but gave no further information on why he had been fired with just a few weeks left in the season.

Mourinho has been criticized in recent weeks as Spurs' performance dropped off in the second half of the season. His management style was blamed for the team's failure to advance beyond the Round of 16 in the Europa League and a series of poor performances in Premier League games that sees the London club at seventh and likely to miss out on a Champions League spot with only a few games left to play this season.

He leaves Tottenham with a 51 percent winning percentage, the lowest he's ever recorded as a manager.

Whether Spurs will even be eligible to play in the Champions League remains a question, as the team was one of six Premier League clubs to join the controversial European Super League on Sunday. If the plans for the league go ahead, Spurs could effectively be banned from all other competitions.

Mourinho's sudden departure could be linked to the Super League move, some commentators suggest. The decision to fire the manager came less than 24 hours after the announcement that the club would join the controversial breakaway league, but neither Mourinho or the club have spoken out about his opinion on the decision.

With Mourinho gone, questions remain over some key Tottenham players. Both Son Heung-min and Harry Kane have been linked to transfer rumors over the last few weeks as Spurs continues its lackluster performance. Son and Kane, who this season broke the record for the greatest goal scoring partnership in Premier League history, could both consider looking elsewhere for more opportunities.

Son is believed to have a very strong relationship with Mourinho, and the two share the same management agency. Whether Son's future at Tottenham will be influenced by the manager's departure remains to be seen.

"Thank you for everything Boss," he tweeted. "A pleasure to have worked together. I wish you all the best for your next chapter."