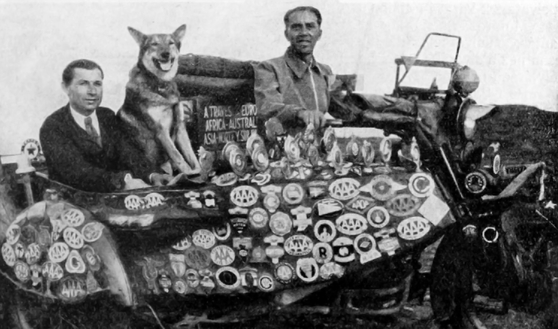 
Motorcycle fans were not the only ones who heard about the two Hungarians who made an incredible journey around the world on a sidecar motorcycle between 1928 and 1936.

They struggled with financial problems after the departure, but by the end of the journey they became wealthy as a result of many donations and plenty of support. During their ride, they also crossed the Korean Peninsula.

From North Africa to China 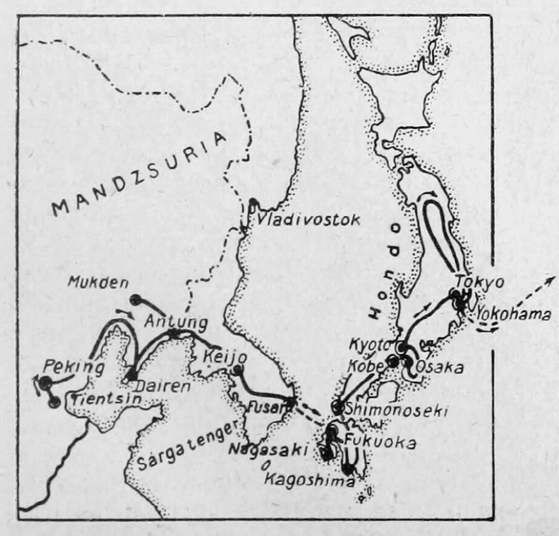 According to the archive newspapers, Sulkowsky and Bartha were looking for a job in Italy when they decided to leave for the long journey.

At that time, the idea of long-term travel was practically commonplace in Europe probably due to the influence of the famous novel written by Jules Verne, "Around the World in Eighty Days." In 1928, the two friends purchased a Harley-Davidson sidecar motorcycle with their savings in Paris.

Departing from West Europe, they left for North Africa via Gibraltar. In the first part of the journey, the two men were accompanied by an extravagant girl, Mimi, who also drove the motorcycle from time to time.

However, in the Middle East, Mimi contracted malaria, forcing her to leave the team. From Arabia, the two men went to India and then left for Australia by ship. Since the news of their arrival usually overtook them, the local people organized welcome rallies for the young Hungarians in many cities.

The representatives of two global petrol companies offered them free fuel for the whole journey, hotels gave them free accommodation, and many individuals invited the bikers for meals.

The locals often accompanied them with their motorcycles and automobiles.After the ride in Australia, they moved to Southeast Asia — via Celebes, Jawa and Sumatra, they arrived in the Malay Peninsula. The bikers crossed the French Indochina and arrived in China where they were surprised at the huge contrast within the country. 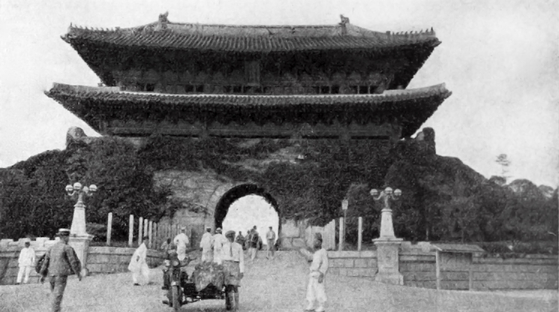 The world-traveler Hungarian ’ s motorcycle in front of the Namdaemun gate in 1930. [HUNGARIAN EMBASSY]

In some places, they suffered from the lack of roads and bridges, but then they were shocked at the modernization in Shanghai.Sulkowsky described in his letter that the huge metropolis was filled with neon lights and advertisement boards, traffic was busy, and many European people were observed.

Moving northeast, they had a smooth ride in the Liaodong Peninsula where they enjoyed the newly built asphalt road.

However, when the men reached the neighborhood of the Korean Peninsula, they were worried about the possibility of encountering the armed Chinese and Korean communists who allegedly were stationed in the region.

It is likely that the alleged communists were anti-Japanese fighters who were active in the whole territory of Manchuria at the time.

To Seoul via Pyongyang 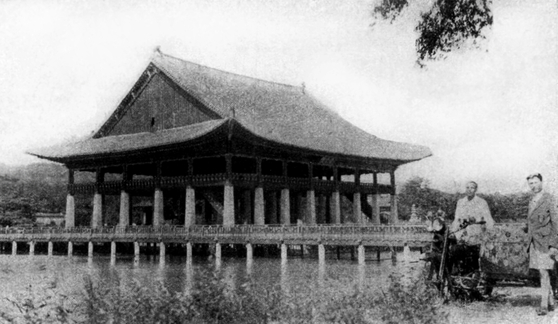 The travelers in front of the Gyeonghoeru Pavilion in the Gyeongbok Palace. [HUNGARIAN EMBASSY]

The sidecar motorcycle crossed the Amnok River between Andong (now Dandong) and Shinuiju in the summer of 1930. According to Sulkowsky's letter, the first 500 kilometers were free from difficulties.

They reached Pyongyang on the first day and spent a night. Due to the Japanese colonial rule, the city was called by its Japanese name, Heijo.

According to Sulkowsky's letter, even though the roads were in bad shape, it was better than those in some Chinese provinces. On the second day, the bikers arrived in Seoul, which was called Keijo at the time.Sulkowsky sympathized with the Koreans. As a sharp-eyed person, he observed that none of the "real Koreans" liked the colonial status under the Japanese Empire.

The young Hungarian wrote a prophetic conclusion about the colonial status in his letter: "This [situation] won't last long." According to Sulkowsky, as the Koreans knew their language shared the same Ural-Altaic roots with the Hungarians, they considered the bikers as "distant relatives."

The young man found out that the two countries had something in common: Both nations were based on an agricultural society and the atmosphere of the Korean cities were similar to what he saw in the Hungarian villages.

The Koreans were kind and helpful to the Hungarian bikers, but the bikers got into some trouble after leaving the capital. Sulkowsky and Bartha had five very hard days on the way to Busan due to the lack of paved roads.

They started to suspect the poor road conditions when they were still in Seoul as they only saw a few automobiles and motorcycles.

They also found out that nobody traveled by automobiles or motorcycles to go to neighboring cities. Wealthier locals traveled by train while ordinary citizens traveled on their foot. 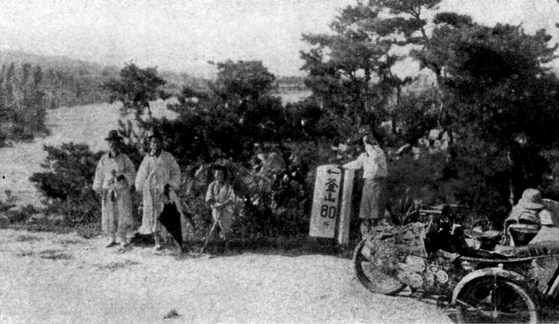 The bikers on their way to Busan. [HUNGARIAN EMBASSY]


The road from Yeouido to Gimcheon was in very bad shape. The two men had to push out their motorcycle which was stuck on the road several times. It was particularly hard because of the hot summer weather, over 37 degrees Celsius (99 degrees Fahrenheit).

They also had difficulties due to the lack of bridges. They crossed shallow streams by motorcycle, but once the generator became wet, the bike would stop in the middle of the water.

Fortunately, dozens of locals from the neighboring village came to help them. When they had to cross deeper rivers, the Hungarians asked for the assistance of local boats.

When they could not find any boats on the bank, they hired local people for them to move the disassembled motorcycle and the sidecar across the river. On one occasion, they had no other option than to cross the railway bridge where they had to push the motorcycle manually on the railway sleepers.

According to Sulkowsky, only two minutes after they crossed the railway bridge, an express train crossed the bridge at high speed. In surprise, as Sulkowsky wrote, they complained about the poor road condition by cursing the colonial governor-general of Korea silently.The roads between Daegu and Busan were also in poor condition. The bikers followed the winding mountainous path relying on local maps written in Japanese.

They sometimes tried to ask the right direction to the local residents who spoke only in Korean. When they finally arrived in Busan after five days, both of them had lost 5 kilograms (11 pounds).

From the seaport, the Hungarians traveled to Japan, where they were continuously followed by civil policemen. The unwanted escort was meant to be a helpful one, but the Hungarians found it very uncomfortable.

They used a trick to send the policmen away for hours: Since it was very hard to find milk in the Japanese countryside, they frequently asked the policemen to bring them some milk.From Japan, the bikers went to the United States via Hawaii, where they were already popular.

They had opportunities to meet with several important and famous figures, including the president, Herbert Hoover, and the Hollywood actress Greta Garbo.

They also met the Hungarian-American actor, Bela Lugosi, who played Count Dracula in a famous horror movie in 1931.Later, the bikers made a long journey to Central and South America. Meanwhile, Sulkowsky sent articles about their adventures to the Hungarian automobile and motorcyclist magazine, Kerek (Wheel).

They came back to Budapest in 1936. Sulkowsky established two film studios with the fund he received during the journey, which later went bankrupt. He died in 1950 on the operating table.
His travelmate, Bartha, established a botanical garden in Budapest to which he applied the terrace farming technique he had learned in Asia.

By Mozes Csoma
Ambassador of Hungary to Korea