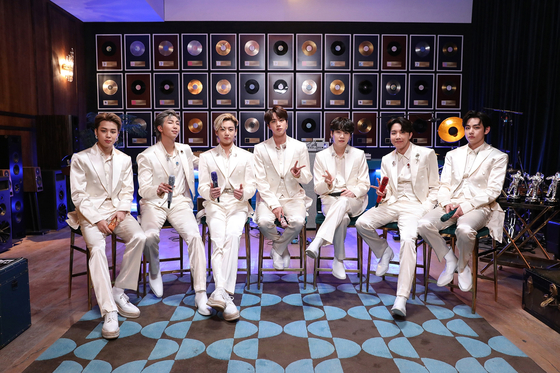 
BTS staged a live performance on “MTV Unplugged” in the United States on Feb. 23, which aired on Wednesday, Korea time.

As it was their first time officially showcasing “Blue & Grey,” one of the tracks in the group’s latest album “BE,” fans across the globe sat before the screen regardless of their time zone to catch a glimpse of the show, real time.

Fans were excited to see Suga return, who was able to join the other members again after undergoing shoulder surgery late last year.

“It’s been a while since I’ve been on stage, and I missed it a lot while I was recovering,” Suga said. “It feels good to be performing together. I’m very happy.”

BTS also announced they will be appearing in Korea’s popular tvN variety show “You Quiz on the Block” on March 24. The show starring Yoo Jae-suk and Jo Se-ho as two M.C.s will feature BTS for the whole episode, talking and solving different quizzes with the members.

BTS you quiz mtv dynamite BE