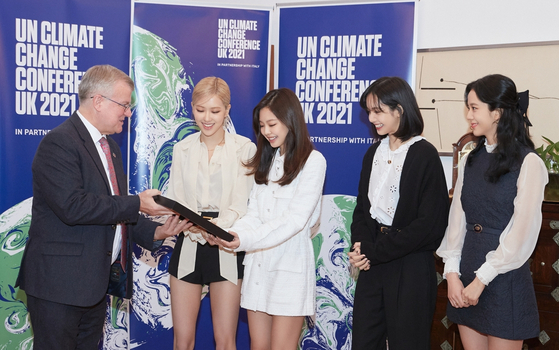 Blackpink receiving a letter from Simon Smith, the British ambassador to Korea, during a ceremony at the British Embassy in central Seoul. [YG ENTERTAINMENT]


Girl group Blackpink has been chosen as the promotional ambassador for this year’s United Nations Climate Change Conference, or COP26, according to their agency YG Entertainment on Friday.

YG said that the members attended the ceremony on Thursday at the British Embassy in central Seoul and received a handwritten letter of gratification from British Prime Minister Boris Johnson, who asked the members to help spread the public notion of climate change.

"Your recent video 'Climate Action in Your Area #COP26' was a huge success, being viewed over 10 million times across social media platforms,” the letter read. “Climate change is the most important issue of our time. […] It is fantastic that you have chosen this moment to lend your voices to this critical issue.”

Last December the group appeared in a video promoting COP26, set to take place in Glasgow, Scotland, in November under Britain’s presidency. The video, which was co-created with the British Embassy in Korea, garnered much attention from Blackpink fandom, Blink.

The video was also introduced at the 2020 Climate Ambition Summit which was co-hosted in the same month by Britain, the United Nations and France.