The big TV smackdown continues, with Samsung Electronics taking another run at LG Electronics, claiming that its newest Neo QLED models can deliver better color contrast and picture quality than LG’s OLED displays at a press event on Wednesday.

The tour at the company’s experience hall in southern Seoul was designed to introduce Samsung’s 2021 TV lineup, but in one section, the company displayed a 55-inch LG OLED TVs right next to Neo QLEDs in an effort to prove technical supremacy of the new releases. 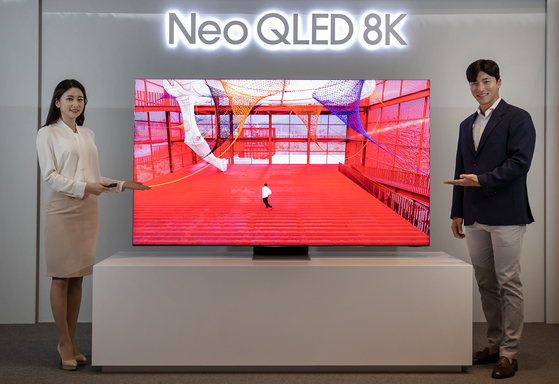 
“[OLED TVs] manufactured by the rival company have limited luminance,” an employee said, offering one of many not-for-attribution digs.

“The Neo QLED is able to render the best picture quality with improved contrast and luminance through upscaling backed by artificial intelligence,” the person said.

The Samsung employee would not say which LG OLED model was being used for comparison.

Currently, the consensus in the display industry is that OLED screens use more advanced display technology than any other liquid crystal display (LCD)-based panels.

Neo QLED TVs use LCDs for main pixels and light emitting diodes (LEDs) for backlighting. What differentiates the Neo QLED from other LCD-LED peers is the tiny size of LEDs in the backlight allowing for better color control.

As for the OLED, a film of organic compound emits light directly without the need for a backlight.

The Neo QLED will be made available in both 4K and 8K resolutions and come in sizes ranging from 50 to 85 inches.

The pricing is the same or slightly higher than LG’s OLED TVs announced this year.

The appliance maker also took the wraps off smaller variations of premium Micro LED models for the first time during the event after it introduced 110-inch Micro LED last December.

The 99-inch and 88-inch models will become available this year first in Korea and then other parts of the world.

Samsung plans to release a 76-inch Micro LED TV, although it declined to specify the timing.

The Micro LED models boasted the most stunning picture quality in the showroom as they use an array of microscopic LEDs to form the individual pixel elements – not as a backlight.

A backlight is not needed since the microscopic LEDs can directly emit light, therefore these models excel at displaying objects like sparkling stars and jewelry.