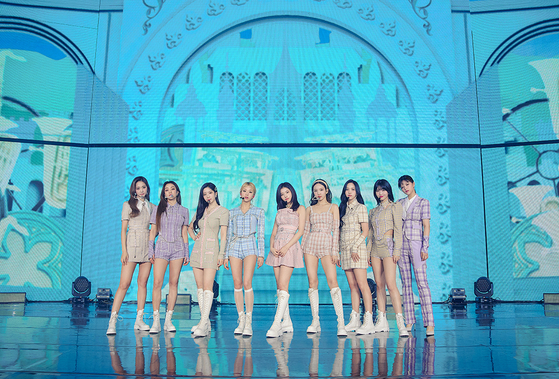 
Twice will drop its newest Japanese single “Kura Kura” on May 12, according its agency JYP Entertainment on Monday.

News of the new single came as a surprise when it was announced Saturday during an online live event “Twice in Wonderland” for fans in Japan.

“Kura Kura” will be the girl group’s eighth Japanese single. The agency’s executive producer Park Jin-young wrote the lyrics of the song which is said to express the feelings of two people becoming mesmerized with one another.

The group has sold a total of over 10 million hardcopies of its albums and singles as of December, seeing success both at home and in Japan.

In Korea, Twice as sold 5.9 million copies of its albums since its debut mini album “The Story Begins” in October 2015 to its most recent third regular album “Eyes Wide Open.”

In Japan, the group has sold over 4.2 million hardcopies of both albums and singles from June 2017 starting with its debut Japanese album, “#Twice,” to its most recent seventh single “Better.”