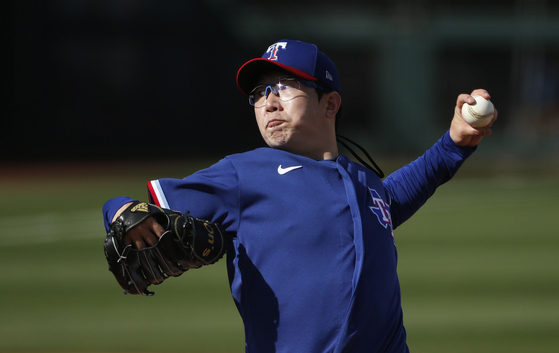 Yang Hyeon-jong of the Texas Rangers pitches against the Los Angeles Dodgers during the eighth inning of an MLB spring training game at Surprise Stadium in Surprise, Arizona on Sunday. [AFP/YONHAP]


Texas Rangers pitcher Yang Hyeon-jong allowed a home run in his first spring training outing, an inauspicious start to his bid to earn a spot in the major league squad.

In the exhibition game held Sunday at Surprise Stadium, Arizona, Yang, who signed a minor league contract with the Rangers this season, pitched one inning, giving up two hits including a home run in the 4-3 win over the Los Angeles Dodgers. Despite the tough outing, Yang was awarded the save for the game.

Mike Foltynewicz started against the Dodgers for two innings, with Yang taking the mound as the Rangers' fifth pitcher at the top of the eighth inning with a 4-2 lead.

Yang started strong, striking out right-handed batter Sheldon Neuse with a powerful fastball. He then drew Omar Estévez to a fly out in center field.

But things fell apart when Yang allowed right-handed hitter DJ Peters a big home run over the left outfield fence after throwing a hanging breaking ball with two balls and one strike.

James Outman then hit a single off Yang, continuing to rough up the MLB spring tranining rookie.

The inning ended when Elliot Soto's bat broke and shortstop Yonny Hernandez tracked down the hit in shallow left field to end the Dodgers' eighth inning without additional losses. Yang threw a total of 21 pitches.

This was one of the few opportunities Yang, who signed a split contract with the Rangers and is most likely headed to the minor league, has to prove his value in the exhibition games.

In a postgame interview, Yang said that he was more excited than nervous about his first spring training outing, and is remaining positive as he gets used to the MLB ball.

"My biggest goal is to keep playing in the big leagues," Yang was quoted as saying on MLB.com. "This is one of the processes to learn and it's step by step. I'll keep going every day and every outing for me to achieve my goal."