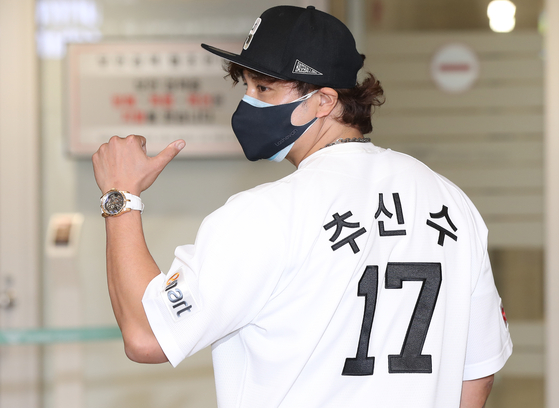 Choo Shin-soo of the SSG Landers poses in an Incheon jersey after arriving at Incheon International Airport on Feb. 25. [YONHAP]

Speaking ahead of a practice game against the Lotte Giants at Sajik Baseball Stadium in Busan on Thursday, Kim said he was thinking of putting Choo second in the lineup to take advantage of his ability to get on base and give big hitters Choi Joo-hwan and Han Yoo-seom a chance to see some action in the No. 5 and No. 6 spots.

Choo, who will make his first appearance in the KBO this year after spending his career in the major league, is famous for his ability to get on base. In 2018 he recorded an incredible 52-game on-base streak, one of the longest in MLB history and a Texas Rangers record. He is fearless at the plate, racking up 152 hits by pitch throughout his major league career, the second highest of any active player and 23rd highest of all time.

Kim said Choo could also play third in the batting order and will play in left field.

Choo joined the Landers for spring training today and is expected to make his first appearance in a practice game against the Samsung Lions on Tuesday or Wednesday next week. The official KBO exhibition game schedule will begin on March 20.