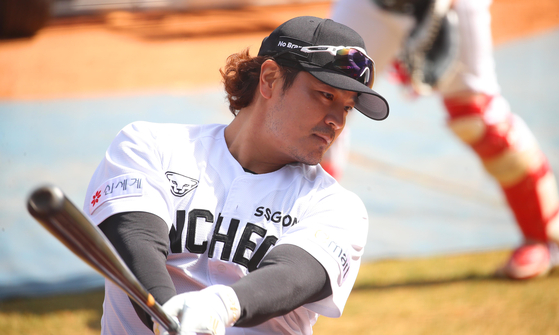 SSG Landers' slugger Choo Shin-soo trains on the sidelines of a practice game against the Samsung Lions in Daegu Samsung Lions Park on Tuesday. [YONHAP]


With SSG Landers slugger Choo Shin-soo expected to make his first appearance for his new club in an exhibition game on Saturday, it's nearly time for the major league veteran to quite literally step up to the plate.

After finishing his mandatory 14-day quarantine on March 11, Choo joined his new teammates and coaching staff at spring training.

The Landers slugger made it clear he came back to Korea for one reason: "I came to the KBO to win."

Choo began training at Munsu Baseball Stadium in Ulsan on March 13, when his team was set to play a practice game against the KT Wiz.

It was the first time Choo had stood on a baseball ground in six months, since his final game with the Texas Rangers on Sep. 28 last year.

SSG manager Kim Won-hyung watched Choo closely to decide whether he should use him in practice games this week, ultimately deciding to keep him on the sidelines until exhibition games proper start against the NC Dinos on March 20.

Choo has been working on his batting in training and also practicing in outfield, having spent most of the last few years as a designated hitter in the KBO.

"This is where I belong," Choo said after finishing training. "I am so happy."


Choo also talked about the pleasure of being able to communicate with his teammates in Korean for the first time in the 38 year old's career.

"I liked this when I was on the national team," he said. "I do speak English, but there was never a time in the United States when I could speak, listen and understand in my most comfortable language. It was hard to express the feelings deep inside my heart and I gave up over time, but now I'm so grateful and happy for just being able to talk and share [things] in my own language."

He has also had a lot of time to talk to manager Kim.

"I thought there would be different points of view because Choo lived in the United States for a long time, but there wasn't at all," Kim said. "He was very easy-going."

Choo also said his first impression of the new manager was very good.

"Kim is charismatic," Choo said. "At the same time, I had an impression that he was trying to make the players as comfortable as possible."

KBO fans are paying keen attention to Choo's 2021 performance. Although he is entering the final few years of his career, the major league veteran's skills have not rusted.

Regarding the attention, Choo said, "Even I don't know what results I can bring."

"I gave up a lot of things when I left the United States. I didn't come here just for myself. I came here to make good results. I came because I have a dream and a goal," he said.