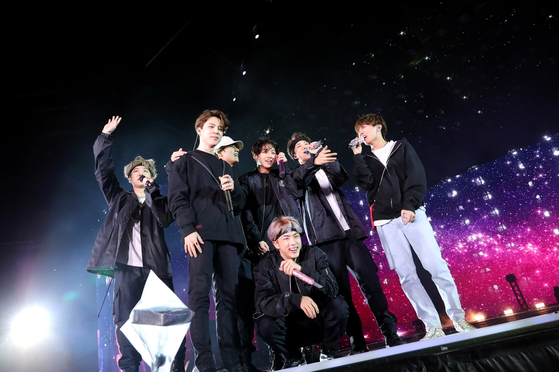 A scene from the BTS documentary ″Break the Silence: The Movie.″ [JTBC]


Cable channel JTBC will be the first to air boy band BTS's documentary “Break the Silence: The Movie” on Monday, in celebration of the band’s Grammy nomination.

“Break the Silence: The Movie” captures behind-the-scenes footage of the septet during the band’s “Love Yourself: Speak Yourself” world tour across Europe, Asia and Seoul. It had its theatrical premiere in some 100 countries across the globe including Korea.

The Grammys is being held on the same day, for which the band this year became the first-ever Asian act to perform as a nominee.

The movie is scheduled to air at 10:30 p.m. on Monday, and the channel’s variety show “Alone Nice” episode is subsequently canceled.

The channel will air an episode of “Golden Disk Best Performance” at 1 p.m. Monday, a collection of the band’s performances at the Golden Disk Awards from 2016 to 2021. It will continue to air other episodes of variety shows featuring BTS, such as “Men on a Mission” and “Dining Together.”