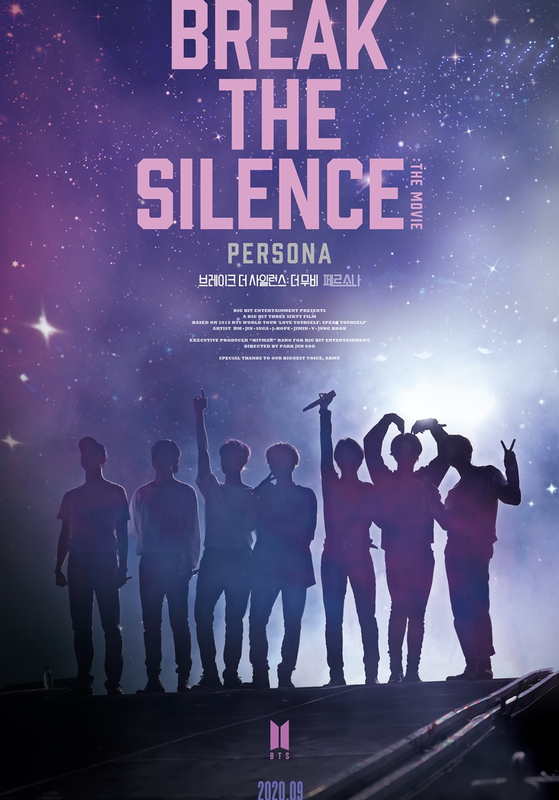 The official poster for the upcoming movie "Break The Silence," which will hit local theaters on Sept. 10. [BIG HIT ENTERTAINMENT]


Boy band BTS announced the release date for its fourth behind-the-scenes documentary “Break The Silence,” on Friday, exciting fans worldwide as the movie will be released a lot sooner than expected.

The movie will be released in Korea through CGV on Sept.10.

The group’s agency Big Hit Entertainment also released a poster for the film on Friday.

The official “Break The Silence” movie poster features the silhouette of each of the seven BTS members — RM, Suga, J-Hope, Jimin, Jin, Jungkook and V — with their hands in the air as they perform on a stage filled with a purple haze.

The movie follows the K-pop group throughout the last year, including at its first international stadium tour “Love Yourself: Speak Yourself” at London's Wembley Stadium, as well as stopping in 10 cities in the United States as they break Billboard records. The film will make its way to the United States on Sept. 24, according to the agency.

Prior to the new film’s release, BTS’s third documentary “Bring the Soul: The Movie” (2019) will re-hit the silver screen worldwide from Aug. 28, when the teaser for “Break the Silence” will be released.

Ticket sales for the re-release of “Bring the Soul: The Movie” in Korea will be announced soon.

'Seventeen Power of Love: The Movie' set for release on April 20

New use of space