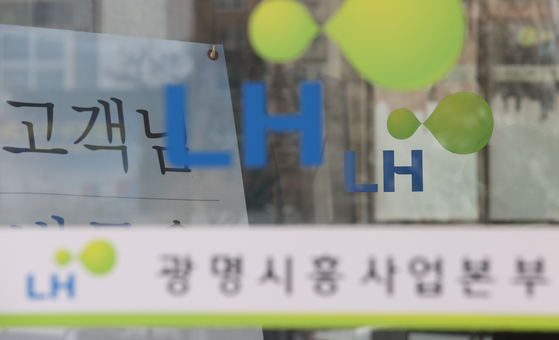 An office of Korea Land and Housing Corp. in Gyeonggi on Thursday. [YONHAP]

An executive of the Korea Land and Housing Corp. (LH) was found dead near his apartment in Bundang District, Gyeonggi, on Friday.

A passerby spotted the executive, 56, bleeding near the entrance of the apartment around 9:40 a.m. Friday and called an ambulance. He is suspected to have leapt to his death from his home, according to police.

He was sent to a hospital nearby but pronounced dead shortly after.

Police found a note in his home.

“I did something that wasn’t right when I was the director of the [LH] headquarters in North Jeolla,” it read, according to Yonhap News. “It pains me. I am sorry to everyone.”

The executive reportedly had just one year left until retirement.

LH employees are embroiled in a snowballing land-grab scandal.

Earlier this month, the civic groups People’s Solidarity for Participatory Democracy and Lawyers for a Democratic Society accused 14 LH employees of purchasing land in Gwangmyeong-Siheung, Gyeonggi.

The purchases were on the site of a 70,000-unit New Town development announced by the Land Ministry last month.

LH itself found one more employee who may have purchased land in the area.

Police did not disclose Friday whether the senior-ranking employee was one of the accused.

Of the accused, at least four have worked at the headquarters in North Jeolla, according to records about LH submitted to a Democratic Party representative and reported by Yonhap earlier in the week.

LH employees or their relatives are accused of purchasing 23,000 square meters (5.7 acres) of land for roughly 10 billion won ($8.9 million) before the plan was made public, raising the possibility that they used inside information to buy the land.

Family members, including spouses, were used as intermediaries to buy the land, the civic groups claim.

The prime minister on Monday ordered the formation of a special joint investigative task force to work with the National Tax Service and the Financial Services Commission to examine allegations of illegal property sales and acquisition by employees at LH and related parties.

Police told the press on Friday that they have found over 100 people involved in the scandal and will be investigating them.

If you or someone you know is feeling emotionally distressed or struggling with thoughts of suicide, LifeLine Korea can be contacted at 1588-9191. The Seoul Global Center offers English-language counseling. Contact 02-2075-4180 to arrange a session. Other international helplines can be found at www.befrienders.org.