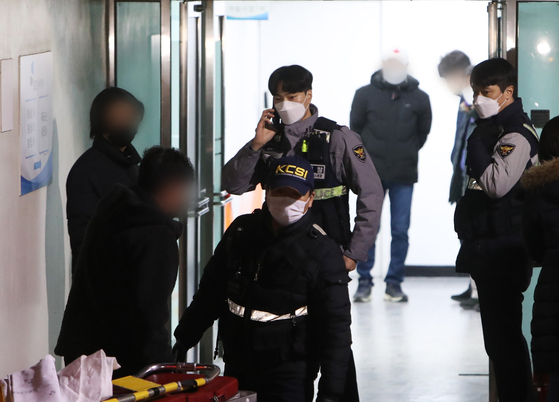 Police conduct an investigation at the Seongnam Development Corporation building in Seongnam, Gyeonggi on Wednesday, following the discovery of company official Kim Moon-gi's body on the first floor the night before. [YONHAP]


Kim Moon-gi, director of the Seongnam Development Corporation's project development team, was found dead in his office Tuesday in a possible suicide.

He was being investigated as a person of interest in the Daejang-dong development corruption scandal and is the second official from the city-run developer to die this month.

The company has been hit with allegations that high-ranking employees played a key role in setting up a shareholder composition and profit distribution scheme massively favorable to Hwacheon Daeyu, a small asset management company, and its Cheonhwa Dongin affiliates.

An official from the company who spoke to the JoongAng Ilbo on the condition of anonymity said, "Employees who received word from Kim's family that they could not reach him opened the door of the director's office and found Kim dead."

Yoo was found dead near his home in Goyang, Gyeonggi, a day after leaving a resignation letter with his secretary.

Before Kim's body was found, the police received a report that he had gone missing and were trying to locate him. Although Kim appeared to have gone to work as usual, the family filed a report in the evening when they could not contact him even after work hours had ended.

Police believe that Kim, like Yoo, took his own life in connection with the allegations he faced in the Daejang-dong development scandal. They have refused to confirm whether he left a suicide note.