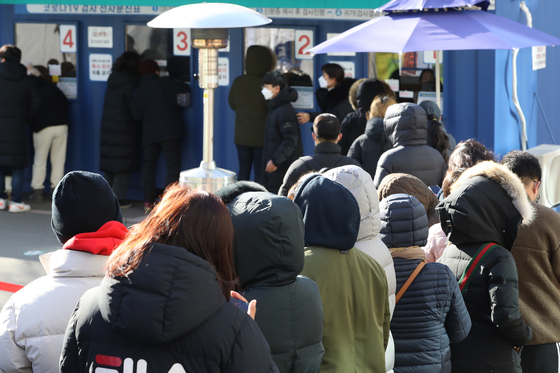 People line up for Covid-19 tests outside a health center in Daegu Thursday morning, braving a cold spell. [NEWS1]

Public health measures will have to change to prepare for the Omicron variant becoming dominant in Korea, the government admitted.

In a joint briefing on Covid-19 responses for 2022, different government agencies said they plan on concentrating on reducing the number of critically ill patients and deaths next year. The agencies included the Ministry of Health and Welfare, Ministry of the Interior and Safety, Ministry of Food and Drug Safety, and the Korea Disease Control and Prevention Agency (KDCA).

Earlier this month, the government put on hold the “living with Covid-19” policies introduced at the beginning of November amid a spike in Covid-19 cases and an increase in critically ill patients.

“The new Omicron variant appeared and has been shown to be two to three times more transmissible than the existing Delta variant," Lee Ki-Il, deputy minister of health care policy, said in the briefing, "but the severity of cases appears to be lower.”

Referring to the three-phase “living with Covid-19” scheme, Lee said, “Since this plan was made without the new variant in mind, we will watch the Omicron situation and create a social distancing plan to cater to it.”

A government plan to expand the vaccine pass system to include 12- to 18-year-olds is expected to be delayed from February to next March, said officials.

On Dec. 6, Korea expanded its Covid-19 vaccine pass system, requiring full vaccination or a negative PCR test conducted within the previous 48 hours to enter many places. Minors were exempted, but the government said a youth vaccine pass will be enforced for those aged 12 to 18 from Feb. 1, a move protested by some parents. The government aims to complete administering booster shots by March.

The government plans to earmark an additional 6,900 hospital beds through next month in case daily cases surpass 10,000. That will bring the total to 24,702 beds in hospitals.

It will broaden home treatment for asymptomatic patients and those with milder symptoms.

The government also plans to buy enough vaccines next year to prepare for a prolonged pandemic. It earmarked 2.6 trillion won ($2.18 billion) to purchase 90 million doses of Covid-19 vaccines. This includes 60 million doses from Pfizer, 20 million from Moderna and 10 million AstraZeneca and Novavax vaccines made by SK Bioscience.

While health officials see an overall downward trend in Covid-19 cases, critical cases remained above 1,000 for the tenth consecutive day.

The number of critically ill Covid-19 patients was 1,145 Thursday, the second highest to date after reaching a record of 1,151 the previous day, the KDCA said.

There were 73 more fatalities, bringing the total death toll to 5,455.

Korea reported 67 new Omicron variant cases, of which 41 were imported and 26 were domestically transmitted.

Of the total of 625 reported Omicron cases, 293 were imported and 332 locally transmitted.

On Thursday, the country rolled out a new Korean-made polymerase chain reaction (PCR) test that can detect the Omicron variant within three to four hours.

The new PCR test is the first that can detect all five main Covid-19 variants: Alpha, Beta, Gamma, Delta and Omicron.

The test kits were delivered to local governments nationwide the previous day. Previously, it could take up to five days to get results for Omicron cases as an additional genome analysis was needed. Health authorities said the tests demonstrated 100 percent accuracy.

There were many more intensive care hospital beds available, with a 68.8 percent I.C.U. bed occupancy rate in the greater Seoul area as of 5 p.m. Wednesday, down nearly 10 percentage points from the previous day’s 78.7 percent.

The I.C.U. capacity nationwide was 67.4 percent, a 7.5 percentage point drop from the previous day. There were no patients on standby for hospital beds as of Thursday for a second consecutive day.

The government has taken measures to expand hospital bed capacity amid a shortage of beds in recent weeks. However health experts point out that I.C.U. units usually needs to be 20 to 30 percent empty and that enough medical professionals to staff them is equally important.

The teen received both doses of a Covid-19 vaccine. Health officials said a causal link between vaccination and death has yet to be confirmed. This is the youngest reported death after a vaccination. Three other teens, two 18-year-olds and a 19-year-old, were reported to have died after being vaccinated. 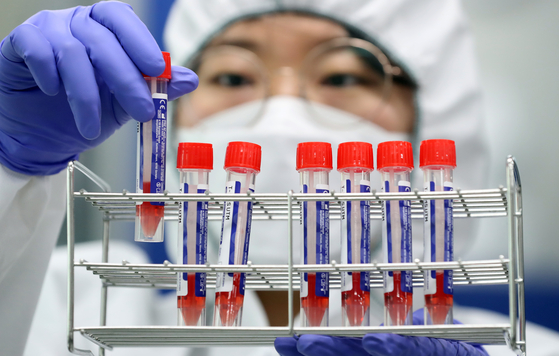 A researcher at the Sejong Institute for Health and Environment in Sejong City examines refrigerated Covid-19 samples Thursday after Korea rolled out new PCR tests that can detect the Omicron variant within four hours to be used by local governments nationwide. [NEWS1]