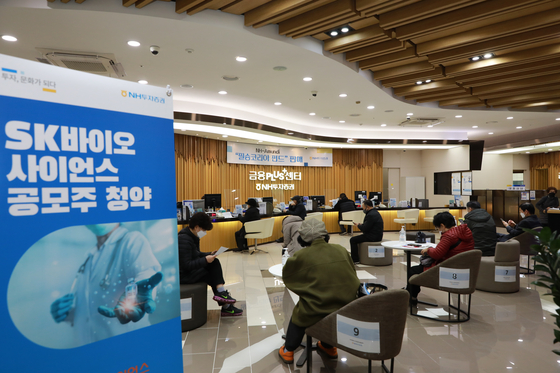 SK Bioscience will start trading on Thursday as a Kospi constituent.

Subscribers to the offering by the Covid-19 vaccine maker and developer are hoping for a big boost in the company's share price on the first day of its trading.

The share's starting price, set based on bid and ask price between 8:30 a.m. and 9:00 a.m., before stock market opening on the listing day, could range from 90 percent to 200 percent of the public offering price.

If the starting price is set at twice the public offering price, and if the shares soar by 30 percent, the daily gain limit, the drug maker's shares can close at 169,000 won per share.

The jump would take the company's market capitalization to 12.9 trillion won, from roughly 4.9 trillion won based on the subscription price.

Among recent initial public offerings, Kakao Games and SK Biopharmaceuticals have both started trading at double the subscription price on their first day.

Kakao Games, which listed on Kosdaq in September last year, rose by the daily upper price limit for two trading days, while SK Biopharmaceuticals, listed in July last year, managed to hit the daily ceiling for three trading days in a row.

Analysts say shares of SK Bioscience have a good chance of soaring as the number of shares available on the first day will be limited.

According to corporate filings by the drug maker, 85.26 percent of the shares allocated to institutional investors are subject to obligatory retention for a minimum of 15 days to as long as six months.

These are shares institutional investors agreed not to sell for a set period.

In the case of SK Biopharmaceuticals, 52.25 percent of the shares allocated to institutional investors were locked up, and for Kakao Games 72.57 percent.

Major shareholders include SK Chemicals, which will own 68.43 percent of the drug maker after stock issuance, according to the company's filing.

Only some 11.6 percent of total issued shares are expected to be available for trading on the first day.

The low number of circulating shares could drive up share prices.

The company is said to have good business prospects.

Han Byung-hwa, an analyst from Eugene Investment & Securities, said in report Wednesday that the company could grow into a global vaccine developer as it produces Covid-19 vaccines for others and also develops its own vaccines.

"The success of its own vaccines will be crucial to increasing the company's value," Han said.

Han projects that if the company can launch its own Covid-19 vaccine by the second half of next year, its market capitalization could soar to between 16 to 25 trillion won.

SK Bioscience is a contract manufacturer of AstraZeneca and Novavax's Covid-19 vaccines and it has two vaccine candidates of its own.