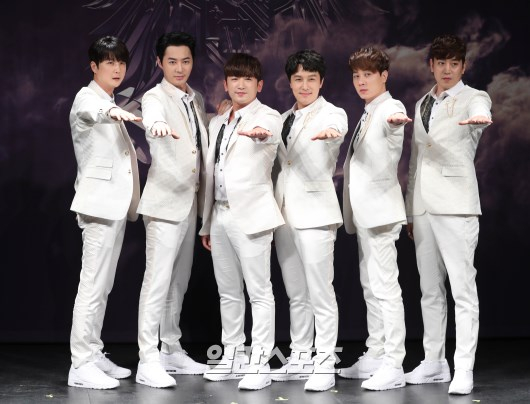 
Shinhwa members Eric and Kim Dong-wan finally mended their relationship after engaging in an online dispute starting Sunday, which threatened the breakup of the 23-year-old boy band.

Eric posted a captured image of a group chat room that includes all the band members with a comment that reads “See what happens when the real Shinhwa Changjo wakes up from its sleep,” thanking the fanclub for intervening in their dispute and mitigating the situation. Shinhwa Changjo is the name of the band’s fanclub.

“I want to thank Shinhwa Changjo, who were off living their own lives but came running to clear things up as soon as they heard that Shinhwa was in danger. You guys are really amazing,” Eric added.

The 42-year-old member also wrote that he and Dong-wan had talked things over and decided not to fight about who was right and wrong and let go of their pride for the sake of the band.

The conflict between the two members came to light on Sunday after Eric posted a now-deleted message on his social media, tagging Dong-wan and criticizing him for not joining in the group chat of Shinhwa members for the past six years and also not attending the band meetings. Eric said that if the situation remains the same, the members of Shinhwa should stop acting as if they are all close to one another and just go their separate ways.

Eric’s criticism was a response to a comment Kim made while talking to his fans on audio-based mobile application Clubhouse, saying that the band is facing some difficulties because one of the members has become tired of working.

Meanwhile, the band’s agency Shinhwa Company released a statement Tuesday that they will take legal action against those who continue to post malicious comments regarding the band members and their families.