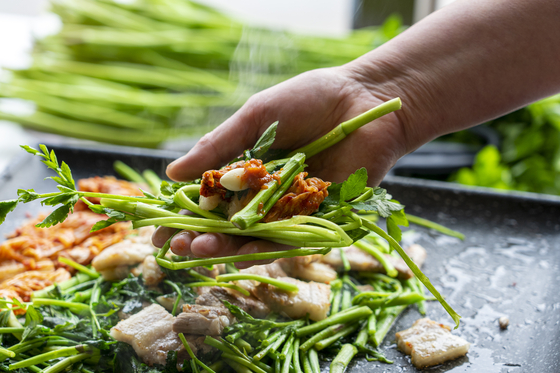 The particular plant, also known as water parsley, grows well in damp, shady areas. It ranges in height, with some growing taller and thinner and others growing shorter with leaner stems, that come with a slightly heftier price tag. The average price of minari is 3,000 won ($2.70) per pack.

Different from naengi, dallae, and dureup, some spring vegetables that are always in demand when they are in season, minari is only now seeing interest because of the movie, with more consumers reaching for the plant to add some greenery to their table tops.

Minari can be eaten both raw and cooked. Usually the leaner and shorter version is better eaten raw after marinating it lightly with sesame oil or gochugaru (hot pepper flakes). The stem part of the plant is more widely used in recipes to add a crunchy texture and refreshing taste. Minari harvested in North Gyeongsang’s Cheongdo is usually shorter in length and particularly popular for its softer texture.

The most common use of minari is in soup, especially a popular Korean spicy fish soup called maeuntang. The refreshing taste that comes from the plant offers balance to the heavier flavor coming from fatty fish and intestines which is mixed with gochugaru and gochujang, or hot pepper paste.

The plant can also be grilled and served as an accompaniment to pork belly. 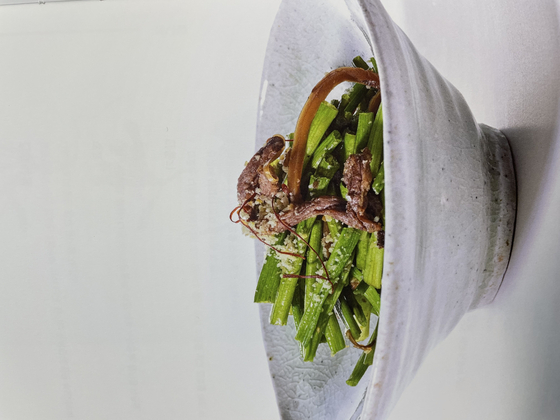 Stir-fried and marinated minari, a type of banchan, from a recipe book by Michlin-starred restaurant Onjium. [ONJIUM]

Minari was served to royal families in the Joseon Dynasty (1392-1910). Award-winning chef Cho Hee-sook of Hansikgonggan, who has been recognized by the Michelin Guide Seoul and Asia’s 50 Best Restaurants, says cooks in the palace often chose minari whenever they needed something green on the table. It was made into jeon, a type of small pancake, or rolled with thin slices of beef.

“It actually goes very well with both meat and fish, so it is easy to match with any ingredients to create a dish with a green note,” said Cho.

“You can also make kimchi with minari, and that’s what I’m thinking about doing this year with the packs I just got this season.”

She added that while the stems were mostly used for food cooked in palace as the final dishes needed to look simple and clean, these days, for more a natural look, the entire minari is utilized.
In line with the growing interest, retailers have reported that sales of minari are shooting up.

GS The Fresh, a supermarket chain operated by GS Retail, said the sales of minari from Feb. 26 to March 9 jumped by 170 percent compared to the same period last year. Another large retailer, Emart, said sales of minari jumped 42.4 percent from March 4 to 10 year on year, while Lotte Mart saw an increase in sales of about 16.3 percent on-year from March 1 to 10. 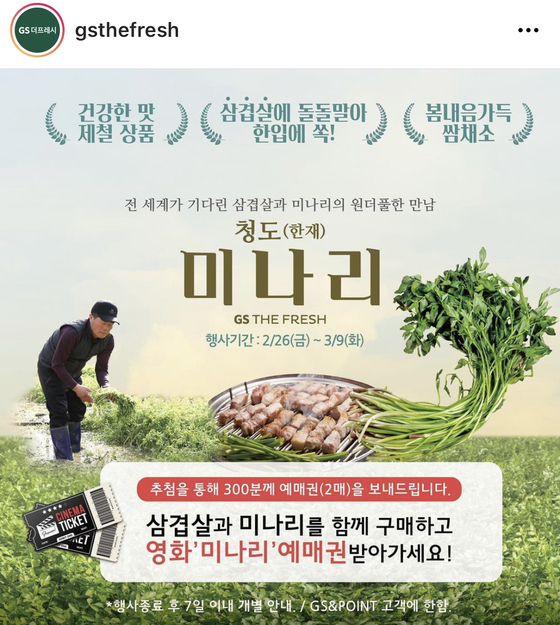 A promotional image by GS The Fresh which offered consumers who bought minari and pork belly together a chance to win movie tickets for ″Minari.″ [SCREEN CAPTURE]

GS The Fresh speculates the movie either being nominated or winning so many awards at big name movie festivals has contributed to people paying more attention to the plant.

Because many consumers purchase minari to grill and enjoy with pork belly, the retailer ran a promotion offering the first 300 people who purchased pork belly and minari together a chance to win two tickets to the movie “Minari.”

It is running the same event again, which started on Wednesday, and its sister company GS25, a convenience store chain, has also started supplying the plant.


Minari at restaurants
If you'd rather try some minari prepared by a professional, here are a list of some places where you can order the plant.

One of the most well-known restaurants is Daeji Sikdang in Euljiro area in central Seoul’s Jung District. The restaurant known for its samgyeopsal, or pork belly, serves its meat with a side of minari. You can put the entire plant on the hot grill to cook right next to your meat so that the fat coming out of the meat coats the greens. The crispy texture combined with its fresh scent acts as somewhat of a palate cleanser. 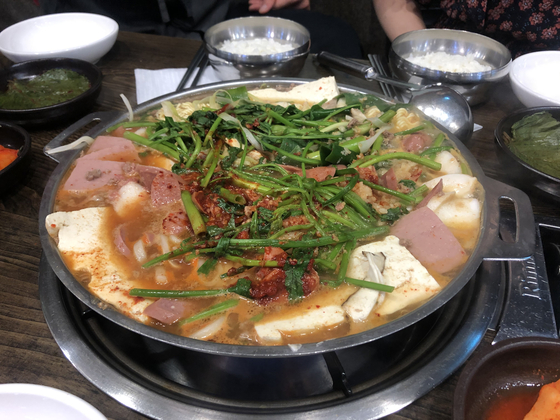 In Gangnam District, southern Seoul, you can go to Daewoo Sikdang. It serves budae jjigae, also known as army stew, as the dish originated from restaurants located close to U.S. army bases in Korea. The stew has all kinds of processed meat like Spam and sausages, a mix of what was widely available at the army bases about half a century ago. This restaurant adds its own twist by adding minari on top of the stew to balance the rich flavors.

Deungchon Kalguksu is a chain of restaurants that serves spicy kalguksu, or knife-cut noodles, boiled with minari. The restaurant has branches across the country and serves spicy soup that is boiled at your table, to which you can add minari and vegtables like mushrooms or thinly sliced pieces of raw beef which cooks in the boiling soup.


Minari at home
Making maeuntang with minari is easy, simply add the chopped plant to the broth and let it cook for about a minute. If you want to cook something more delicate, then try making jeon with minari. Add some water to buchim garu, or savory pancake mix, and stir in some chopped minari to the batter. You can also throw in some seafood if you want to take the recipe to the next level.

Another easy recipe to try at home involves grilling thinly sliced beef and then wrapping it around some minari. You can either eat the minari raw if it’s soft enough, or blanch it lightly in boiling salt water. 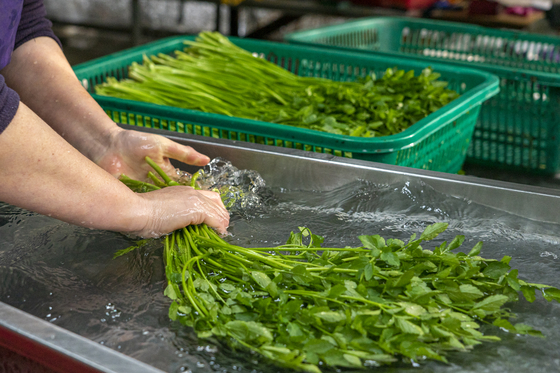 Alternatively, take some blanched minari and then stir fry it with soy sauce to make banchan, a small side dish that accompanies the Korean staples of rice and soup.

You can also easily grow minari at home, after buying a pack from a supermarket. It is usually sold in a bundle, which you should leave tied together. Cut off the leaves to eat and then place the stems in a dish with water. In just a few days, new leaves should begin to sprout.