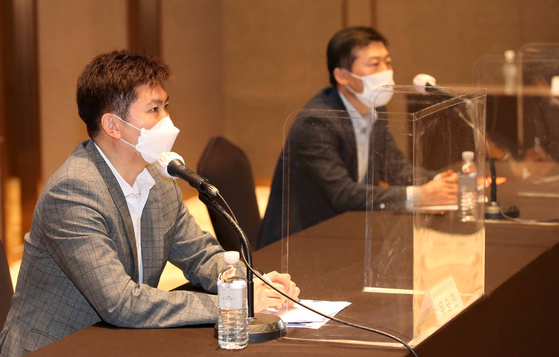 
The Korea Table Tennis Association (KTTA) has been left with a bill of over two billion won ($1.76 million) for the canceled 2020 World Table Tennis Championships in Busan, the organization announced Monday.


According to KTTA head Ryu Seung-min at a press conference Monday, the association has been left with a huge bill for The Hana Bank 2020 World Team Table Tennis Championships Busan after the event was canceled due to the coronavirus pandemic and key sponsors withdrew funding.

By the time the event was canceled, the association had already spent most of the budget.

"As soon as I was re-elected as head of the Table Tennis Association, I went to the bank and signed a loan document for two billion won," said Ryu during a press conference on Monday in Yongsan District, Seoul. "The reason I decided to take the role of chairman again even though I knew that the association owes a lot is because I felt responsible for resolving [the debt]."

The story dates back to early last year.

The tournament, which was supposed to run at the end of March last year, was to be the first time in the 100-year history of Korean table tennis that a world championship was to be held in Korea.

The name "Hana Bank" was added to the front of the original title under the contract agreement. The organizing committee announced that Hana Bank had offered two billion won in sponsorship to ensure the success of the championship.

However, because of the worsening coronavirus pandemic, the table tennis world championships which were postponed three times — from March to June, June to September and September to this year February — and eventually canceled completely.

KTTA had already spent most of the budget for the world championships — including renting out the Bexco Busan Exhibition and Convention Center, advertising the event and manufacturing souvenirs.

At the title sponsorship agreement with Hana Bank held in Busan in February last year, Oh Keo-don, then-Busan Mayor and head of the city committee set up to help organize the event, vowed to "use the Busan World Table Tennis Championship as a stepping stone for the 'International City of Busan.'"


Lee Ho-sung, vice president of Hana Bank, said, "We will provide comprehensive financial services to the players — beyond the simple concept of sponsorship."

But when the competition was canceled, all those offers of support quickly disappeared.

The Ministry of Culture, Sports and Tourism and the Busan Metropolitan Government also withdrew 4.96 billion won of funding.

"The reason why the championship was canceled was due to a natural disaster and not the fault of the KTTA or the organizing committee, and it's hard to even breathe as the association has to bear the burden," Ryu said.