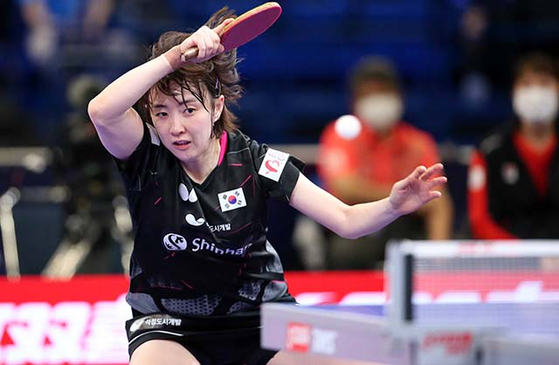 Suh Hyo-won plays the ball during the 2021 ITTF World Table Tennis Championships Finals on Saturday. Suh lost the quarterfinals in straight sets against Yingsha Sun of China on Saturday. [YONHAP]


Suh Hyo-won missed out on a medal at the 2021 ITTF World Table Tennis Championships Finals on Saturday, losing the quarterfinals in straight sets against Yingsha Sun of China.

This is Suh's best result at the World Table Tennis Championships as she has only reached the round of 16 twice in 2013 and 2019. It is also the first time in 12 years that a Korean player has reached the singles' quarterfinals.

World No. 22 Suh's play style is more defensive, and while that gave other players a hard time, world No. 2 Sun was stronger. After Suh conceded the first set 11-9 after a neck-and-neck match, it seemed the tide had turned to Sun's side and Suh lost the next three straight sets.

En route to the quarterfinals, Suh beat Polina Mikhailova of Russia 4-2 in the first round, then won in straight sets against Christian Kallberg of Sweden then won 4-3 against Tianwei Feng of Singapore then 4-1 against Hoi Kem Doo of Hong Kong in the round of 16.

Alongside Suh in the women's singles, Shin Yu-bin beat 2020 Tokyo team bronze medalist Wai Yam Minnie Soo from Hong Kong in four straight sets in the first round on Tuesday but dropped out in the next round losing 4-3 to Sarah De Nutte of Luxembourg.

Shin and Jeon Ji-hee lost to Natalia Malinina and Elizabet Abraamian of Russia in the women's doubles round of 32 while Choi Hyo-joo and Lee Zion advanced to the quarterfinals but lost their quarterfinal match against Chinese duo Tianyi Quian and Meng Chen. Shin and Cho Dae-seong were defeated in their mixed doubles match by Bernadette Szocs and Ovidiu Ionescu of Romania in the round of 32 as were Jang and Jeon against Chien-An Chen and Szu-Yu Chen of Taiwan.

Jang Woo-jin and Lim Jong-hoon are yet to face Japanese duo Shunsuke Togami and Yukiya Uda in the men's doubles semifinals on Sunday, or Monday morning in Korea.